US travelers brace for delays on busy holiday 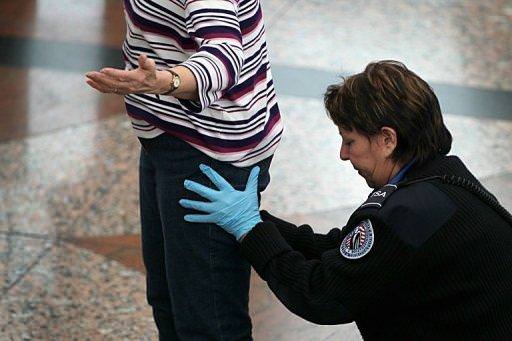 The online organizer of National Opt Out Day is urging holiday travelers to request full-body pat-downs rather than submit to what he calls a "naked body scanner" to "send a message to our lawmakers that we demand change".

While only about three percent of US passengers are subjected to secondary screening, the pat-downs take much longer than stepping into an x-ray scanner.

A mass decision to opt out could bring further delays for Thanksgiving travelers on one of the busiest travel days of the year at already packed airports.

Travelers considering taking a stand should consider the impact on people who "just want to get to their loved ones for the holidays," said John Pistole, head of the Transportation Security Administration (TSA).

"We will process people as quickly and as efficiently and securely as possible, but if large groups of people intentionally slow down that process I don't think that can help but have a negative impact on people making their flights on time."

The more intimate pat-downs and full body scanners were introduced in the wake of a string of foiled bomb plots against US-bound airliners.

Those include last month's attempt to blow up cargo planes and the 2009 Christmas Day bomb plot that saw Abdul Farouk Abdulmutallab, a young Nigerian, allegedly try to ignite plastic explosives concealed in his underwear as his plane approached Detroit.

Pistole said he was "sympathetic" toward those who find the screening to be overly invasive, but said the "current threat environment" makes pat-downs necessary.

The United States is "facing an enemy that is resourceful and innovative in the design, construct and use of non-metallic explosives -- bombs that can take out planes filled with hundreds of people," Pistole told reporters.

Metal detectors and X-rays of bags, coats and shoes simply aren't enough to prevent a more effective underwear bomber from getting on a plane, he warned.

The national uproar gained traction last week after a cell phone video emerged of a disgruntled passenger telling a screener: "if you touch my junk, I'll have you arrested" went viral.

Videos of children being patted down -- including a video that failed to show it was a boy's father and not TSA agents who had actually removed the child's shirt -- and agents patting breasts and genitals fueled the fire.

In one of the most shocking stories, 61-year-old bladder cancer survivor Thomas Sawyer said a TSA pat-down broke his urostomy bag, leaving him covered in his own urine.

"I was so embarrassed and so petrified of going out into the airport and people seeing me and smelling me," Sawyer told ABC News.

Both the TSA and President Barack Obama's administration have tried to respond to the backlash by reminding passengers about the importance of sufficient security.

Federal authorities say they are looking at "less invasive" ways to ensure airport security amidst an uproar over new measures denounced as humiliating and overreaching. Duration: 00:41


"The president's overarching view here is that we need to do everything that we can to
keep the American people safe," White House spokesman Bill Burton said Tuesday.

"These procedures are in place to take on... some of the folks who would do us harm, and they are constantly adapting and evolving."

It is unclear how many people will be willing to opt for a public pat-down instead of the full body scanner whose images are monitored by an off-site screener.

But half of those polled said they thought the intimate pat-down searches "go too far."

The TSA said it has only received about 2,000 complaints from the more than 35 million passengers who have passed through security checkpoints since the new screening procedures were implemented.

Judging by some of the comments on a Facebook page set up by the US Travel Association, not everyone seems to mind.

"I just got a pat down. It felt awesome!" wrote Jonathan Carmona.