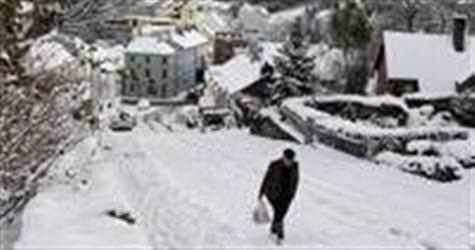 The Europe-wide failure to keep flights operating in cold and snowy conditions is unacceptable and could lead to tighter regulation by the EU, the continent's top transportation official said Tuesday as exhausted, outraged passengers struggled to get home for the fourth day.
Major delays and cancellations disrupted European airports including London's Heathrow, and the Eurostar train link, leaving thousands stranded across Europe as Christmas approached. The icy road conditions in much of Britain also raised doubts about the delivery of Christmas gifts because many side roads were hazardous.

"We are delivering as much as we can, but inevitably some things may not be delivered before Christmas," said Anina Castle, spokeswoman for the Currys chain, which sells computers, iPods, home appliances and many other items.

Currys and many other major businesses have stopped taking online orders for pre-Christmas delivery because of the poor road conditions.

Predicted snowfall at Heathrow did not materialize overnight, allowing cleanup crews to intensify their work, but more than half the flights at Europe's busiest international hub were expected to be canceled.

Transportation Commissioner Siim Kallas said new airport regulations due to be published before the summer could include new requirements on "minimal services" airports will have to be able to provide during severe weather.

He said he will meet with airport representatives in coming days "to ask for further explanations and to take a hard look at what is necessary to make sure they would be able to operate more effectively."

"Airports must 'get serious' about planning for this kind of severe weather conditions," Kallas said. "We have seen in recent years that snow in Western Europe is not such an exceptional circumstance.

"Better preparedness, in line with what is done in Northern Europe is not an optional extra, it must be planned for and with the necessary investment, particularly on the side of the airports," Kallas said.

The terminals at Heathrow were clogged with passengers desperately looking at computer screens to see if they would be able to get to their destinations. So many people were sprawled on the floor that it was difficult to walk.

"It's pathetic -- you would think this is a third world country," said Janice Phillips, 29, trying to get back to Minneapolis and sitting next to her sleeping boyfriend, head propped up on a backpack with his mouth ajar. "I've been here for two weeks and all they've been talking about was this snow forecast. You would think the government could do a better job."

Others pointed out that the snow had stopped on Saturday and the airport was still hobbled three days later.

Eurostar, which links England to France and Belgium by train, also advised passengers to cancel their trips in the coming days and receive a full refund unless travel was absolutely necessary. Eurostar said trains were running with speed restrictions in both England and France as a precuation, because snow and ice stirred up by trains could damage the underside of the carriages.

Outside London's Eurostar terminal, the line of travelers waiting for trains snaked several hundred meters (yards) from the station, down the street and all the way to the British Library.

Inside, puffy-eyed passengers shuffled across the cold concourse, watching anxiously as the line periodically spurted forward. One older man played Beethoven's "Ode to Joy" on his harmonica. The crowd livened up when he switched to Europe's "The Final Countdown."

On the rails, Eurostar trains were still operating at reduced speed, with at least one high-speed train crawling along at 20 kilometers per hour (12 miles per hour) inside the Channel Tunnel.

There were problems in Germany as well. Fresh snowfall forced Frankfurt airport, Germany's biggest, to suspend takeoffs and landings for a few hours early Tuesday -- the latest setback to beleaguered pre-Christmas travelers in Europe and beyond.

Frankfurt has seen hundreds of cancelations over recent days -- often a result of disruption elsewhere in Europe, including major problems at Heathrow.

In Cologne, two railway workers were killed during the night when they were hit by a train as they tried to de-ice a switch. Police said the men apparently overheard or heard too late a warning signal from the train driver, the German news agency DAPD reported. No one aboard the train was hurt.

The situation in Brussels eased overnight as a feared shortage of de-icing liquid failed to happen. More flights than expected were able to take off after the airport managed to secure enough liquid to treat most airplanes departing Tuesday.

The airport had previously warned that it would run out of the liquid -- which aircraft may need to land and take off in cold weather -- by Monday evening and that it wasn't expecting a new delivery until Wednesday morning.

"Most flights are expected to operate as scheduled, in spite of adverse weather conditions," the airport said on its Twitter feed, although its departure board showed more than half of flights either canceled or delayed.