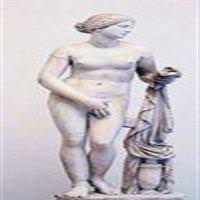 She may be the ancient Greek Goddess of Love, but a picture of a nude Aphrodite on the new passport of Cyprus has set more than hearts racing.

Cypriot diplomats are furious with the interior ministry for failing to consult with the foreign ministry before issuing passports with a depiction of a naked immortal that might offend conservative foreign cultures.

"They are worried that civilians and diplomats could get into trouble, particularly traveling to very conservative Islamic countries," the authoritative Phileleftheros daily newspaper wrote on Thursday.

The interior ministry said it was too late to change them, the newspaper said.

Local legend says Aphrodite (also known as Venus to the ancient Romans) emerged from the sea on a crest of foam just off the Mediterranean island.

The image on the new biometric passports is modeled on a Greek marble statue of a completely naked Aphrodite in the Cyprus Museum located in the capital Nicosia.