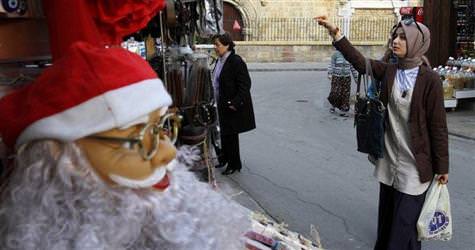 There will be less cheer in some Turkish Cypriot households this holiday season as the grinch appeared in an unlikely guise — toy-snatching customs agents on the ethnically split island enforcing a clampdown on shopping from the Greek Cypriot south.

NICOSIA, Cyprus (Associated Press) — Officials on the Turkish Cypriot side say they had to step in because it was hurting the breakaway north's tiny economy.

It was another strange twist to the Mediterranean island's ongoing division that unfolded in 1974 when Turkey intervened after a coup by Greek Cypriot supporters of union with Greece. The internationally recognized south prospered and now enjoys the benefits of the island's European Union membership.

But the Turkish Cypriot state in the north has languished in isolation and remains unable to trade directly with the world.

New shopping opportunities opened for Turkish Cypriots when crossing restrictions were eased in 2003. Many flocked to global brands like Sweden's furniture chain Ikea, while Jumbo toy stores quickly became a favorite. A €135 ($176) daily cap on goods each Turkish Cypriot shopper was allowed to bring across the checkpoints was often flouted.

With the holiday season gearing up, Turkish Cypriots began stocking up. Then last week, Turkish Cypriot customs agents got tough, seizing items from returning shoppers — including toys — to the dismay of families.

"This was very disappointing for the children and has affected both the parents and the children emotionally more than economically," said Adnan Eraslan, chairman of the Cyprus Turkish Secondary Education Teachers' Union KTOEOS.

The crackdown worked — Turkish Cypriot shopping at Jumbo is down more than 50 percent, a senior Jumbo executive who did not wish to be named discussing company turnover said Friday.

KTOEOS was among several groups that staged a demonstration this week against the crackdown they criticized as unfairly curbing the freedom of Turkish Cypriots to shop where they please.

But action to halt the money flight southwards had to be taken because it hurt Turkish Cypriot businesses, Turkish Cypriot Chamber of Commerce Deputy Secretary General Kemal Baykalli said.

"The rules were not implemented correctly in the past and this gave the illusion that this was OK," Baykalli said. "We are in favor of free trade, as long as it's based on fair competition."

Baykalli said it's not lower prices that draw Turkish Cypriots to stores in the south, but rather greater variety coupled with allure of shopping in trendy shops not found in the north.