US travel headaches continue after "Snowpocalypse" 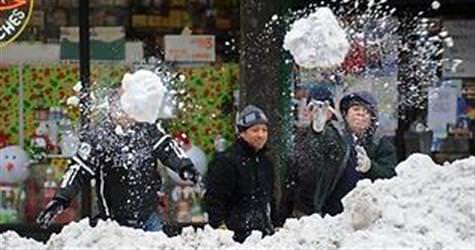 More travel chaos was expected Wednesday in the US northeast after hundreds of flights were canceled and the region dug out from what what some are calling "Snowpocalypse."

The frustration for travelers remained after one of the biggest blizzards in years, which slammed much of the eastern seaboard from the Carolinas into Canada's Maritime provinces.
The system, packing enormous snowfalls and gales left piles of snow as deep as 80 centimeters (32 inches) that created havoc for travelers, especially those flying.
Airlines resumed limited service, but some 800 flights were canceled Tuesday, mostly in the New York area, which was spinning its wheels following the storm that roared up the coast on Sunday and Monday.
Snow plows and salt spreaders struggled in Manhattan, battling through knee-high snow in many streets.
Officials expect it will take several days for New York and its all-important transport hubs to be fully back on track following the sixth heaviest snowfall in the city's history.
"This storm is not like any other we've had to deal with," Mayor Michael Bloomberg said, noting that emergency vehicles were among those stuck in the snow.
"Until we can pull out the ambulances, pull out the fire trucks, pull out the buses, pull out the private cars, the plows just can't do anything," he said. "We still have a long way to go.
New York police have removed some 1,000 vehicles from just three busily trafficked thoroughfares, a fraction of the stalled vehicles stranded on city roads.
The three major area airports -- John F. Kennedy International, LaGuardia and Newark International in New Jersey -- reopened late Monday, but the cancellations of over 5,000 flights meant a huge backlog and more delays.
"With all the cancellations and delays, it'll be two to three days before the airlines are at a regular schedule," said Thomas Bosco, LaGuardia's general manager.
A spokeswoman at the New York Port Authority, the office that manages regional airports and transit, told AFP that 94 flights had been canceled at La Guardia, 281 canceled at JFK, and 423 canceled at Newark.
That was an improvement over Sunday and Monday, but the backlog has affected arriving flights. Late Tuesday, weather-related delays of more than five hours for arriving flights were reported by JFK, and similar delays of three hours by Newark airport.
Passengers clogged airports, overnighting in brightly-lit terminals or queueing for hours in the hopes of changing dashed bookings. Many complained of phoning airlines, but nobody answering the calls.
Julie Stratton was scheduled to fly to Indianapolis, Indiana, from New York on Sunday, but wound up sleeping at LaGuardia. She said that on Monday she was told she might be stuck until Thursday.
Dozens of flights were canceled at Philadelphia International Airport, where hundreds of passengers were still stranded.
"In an emergency like this, we provide pillows, blankets, snacks, water, a diaper, anything we can do to make them comfortable," said airport spokeswoman Victoria Lupica.
New reports said heavy winds caused an accident at Maine's Sugarloaf Mountain ski resort, where several people were hospitalized.