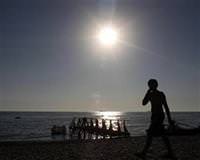 The first ten years of the millennium have proved to be the hottest decade since climate records began, it said.

"Data received by the WMO show no statistically significant difference between global temperatures in 2010, 2005 and 1998," the United Nations body, which compiles its ranking from data provided by British and U.S. agencies, said in a statement.

Data from British institutes on Wednesday showed last year was the world's second warmest behind 1998, while the other two main groups worldwide tracking global warming, based in the United States, said 2010 was tied for the hottest on record.

"The 2010 data confirm the Earth's significant long-term warming trend," said WMO Secretary-General Michel Jarraud. "The 10 warmest years on record have all occurred since 1998."

The difference between the three hottest years was less than the margin of uncertainty in comparing the data, according to WMO, whose assessment is based on climate data from land-based weather and climate stations, ships, buoys and satellites.