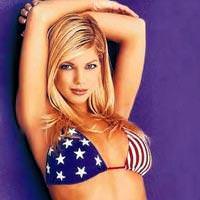 Former Playboy playmate Donna D’Errico shares with SABAH that she is currently training intensively in order to climb Mount Ararat.

Former Playboy Playmate and Baywatch actress, American Donna D'Errico had shared with the US press that her biggest dream was to climb Mount Ararat in order to find Noah's Ark. After hearing the news, we reached the 43-year-old actress and asked D'Errico herself to tell us about her very special dream. The sexy star told SABAH that her interest in Noah's Ark stems all the way back to her childhood. Explaining that she is a strict Catholic, D'Errico states, "The fact that Noah's Ark was found years later to be located somewhere on Mount Ararat really intrigues me. I have wanted to climb Mount Ararat and find that ship since I was a child.
D'Errico explains that she is currently training intensively to get into condition as preparation to come to Turkey and fulfill her dream of climbing Mount Ararat. "This will be an amazing experience for me," D'Errico states.
Explaining that she has never been to Turkey before and does know a lot about the country, D'Errico answered our question of whether she plans to bring a good luck charm with her for her climb. D'Errico responded by stating, "I don't believe in lucky charms, I just believe in God. If I really get there, I will bring my beliefs with me."
The 1995 Playboy beauty D'Errico has two sons. The blonde bombshell has also had roles in a number of tv shows and films.