Bodrum in a storm! 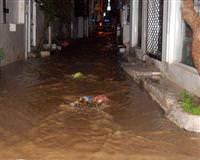 Home to the popular touristic town situated on the Aegean, Muğla's Bodrum district was harshly affected overnight by intensive lightning storms and downpours.

The storm which started in the early evening hours yesterday and increased into the night, resulted in the sinking of a number of small-scale fishing boats in Bodrum's Kumbahçe and Paşatarlası, while larger boats were also in danger.

Also due to the storm, two electricity poles located on Kıbrıs Şehitleri Street were overturned into the road, resulting in a widespread electricity outage throughout the region. A number of the town's seaside restaurants' balconies were flooded due to the heavy rains throughout the night.

Due to the heavy downpours, a number of streets were heavily flooded resulting in a series of car accidents. Police teams patrolled the region throughout the night in order to prevent and aid further occurrences.