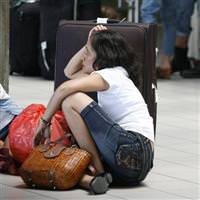 Mount Bromo, on eastern Java island and one of dozens of active volcanoes in the archipelago, started erupting in November. Ash from Mount Merapi, also on Java, disrupted flights in November.

"Several airlines decided to divert their flights or return to base in connection with ash spewing from Mount Bromo," said Bambang Ervan, spokesman for the Indonesian transport ministry.

Yuli Sadoso, an official at Bali airport, said about 1,300 passengers had been hit by the cancellations.

A British Airways flight came close to crashing nearly three decades ago after its engines sucked in ash from another Indonesian volcano, Mount Galunggung, on Java.