Governments pull citizens out of Egypt ahead of march 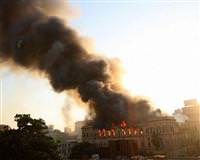 At least 140 people have died since demonstrations began last Tuesday. Many Egyptians, inspired in part by Tunisians' overthrow of their ruler, are demanding that President Hosni Mubarak quit, protests which have prompted governments and companies to pull their expatriates out of the country.

Another two Air China planes were en route to Cairo to pick up more Chinese, while a China Southern Airlines jet was flying to Luxor to pick up about 220 Hong Kong residents.

"The Chinese government takes very seriously the safety of Chinese nationals in Egypt," the Foreign Ministry said in a statement.

Taiwan will bring back nearly 500 of its nationals using charter and commercial flights, The Foreign Ministry said.

Taiwan has chartered a Royal Jordanian Airlines aircraft to fly from Jordan to Cairo and back to Jordan as many times as needed to evacuate Taiwan travelers, the ministry said. The government will then fly its nationals to Frankfurt on a charter flight and back to Taiwan on commercial flights.

All three planes the Japanese government chartered to fly out Japanese travelers stranded at Cairo airport had landed in Rome by 0230 local time (0130 GMT) on Tuesday, carrying 463 people, a Foreign Ministry official in Tokyo said.

These flights picked up almost all, if not all, Japanese people stuck at the airport, he said.

Japan's government is urging an estimated 600 Japanese travelers still in Egypt to leave the country as soon as possible using commercial flights.

Governments began taking steps to pull their nationals out of Egypt on Sunday, efforts which intensified on Monday.

European airlines, including Lufthansa, Austrian Airlines and Air Berlin, said they were sending larger aircraft than usual to Egypt to meet demand and had agreed additional flights with foreign ministries.

Tourism is one of Egypt's top sources of foreign revenue, accounting for more than 11 percent of GDP, and offers jobs in a country with high unemployment. In 2009, about 12.5 million tourists visited Egypt, bringing revenue of $10.8 billion.

Russia has urged its citizens not to travel to Egypt and advised those already in the country to head home.

"We emphatically urge citizens to heed the Foreign Ministry's recommendation and refrain from trips to Egypt," the ministry said. About 40,000 Russians are estimated to be on holiday in Egypt, a favorite Russian tourist destination.

The German Foreign Ministry has issued a travel warning Sunday for Cairo, Alexandria and Suez, but described the situation at Red Sea resorts as calm for the moment.

Britain has advised against travel to Luxor, prompting tour operators TUI and Thomas Cook to cancel flights there.