Foreigners scramble for flights out of Egypt 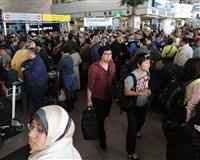 Thousands of foreigners were scrambling to fly out of a chaotic Cairo airport on Wednesday as protesters rallied for a ninth day to reject Egyptian President Hosni Mubarak's timetable for quitting.

China, Japan, Canada, Britain and Turkey have all announced extra flights to the country to evacuate their nationals over the last couple of days.

"The airport is in a state of pandemonium; all airlines are struggling to gain landing and takeoff slots," said Mark Briffa, Chief Executive of Air Partner, an air charter provider.

"The reality is there is not enough spare capacity on commercial airlines to fly the vast number of people who are trying to get out of Egypt at the moment, and some airlines are intermittently suspending flights to and from Cairo, further reducing capacity," he said in an emailed statement.

The UK government said on Wednesday nationals wishing to take advantage of its charter flight to London will pay 300 pounds ($486.4) per seat.

A spokesman for the Foreign Office said the fare was in line with a standard single fare, and similar to the amount being charged by the United States, Canada and a handful of others.

"It is not an ordered evacuation because commercial flights are available," the spokesman said.

"The flight is simply to supplement existing capacity."

The overnight curfew has also hit capacity, with some airlines, including Germany's Lufthansa, bringing forward flight times and switching to jumbo jets to meet demand.

While German tour operators on Tuesday cancelled all holidays to Egypt, Air Berlin said it would still fly planes out on Thursday as normal, even if they were empty, so as to pick up people returning from the Arab country. Tour operators reported the Red Sea tourist resorts remained calm with no supply issues at hotels.

TUI, Thomas Cook and Rewe said they had received only a few requests for customers to fly back early from resorts such as Hurghada and Sharm El Sheik.

TUI's UK operators Thomson and First Choice are repatriating their 950 customers in Luxor, however, where the British government has advised against travel.

"We're hoping to get the majority of them home today," said a spokeswoman.

Tourism is one of Egypt's top sources of foreign revenue, accounting for more than 11 percent of GDP, and offers jobs in a country with high unemployment. In 2009, about 12.5 million tourists visited Egypt, bringing revenue of $10.8 billion.