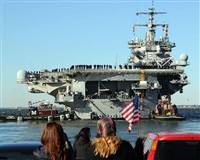 The American fleet nuclear aircraft carrier ship ''USS Enterprise'' will be arriving to the southern Mediterranean town of Marmaris tomorrow.

According to information received by the Marmaris Port Management, the ship, which is expected to arrive to the district tomorrow morning, will be docked out in the open water. The ship is scheduled to spend four days in Marmaris, during which the approximate 4,000 personnel will pay visits on land in groups.
The 342.3 meters-long, 78.4 meters-wide USS Enterprise operates with eight nuclear reactors and has an airstrip larger than an acre, while also stores 85 war planes.
The popular port and tourist town, Marmaris, is getting ready to host the USS Enterprise and its crew. A number of stores and operations located in Marmaris' Covered Bazaar and Bar street, which are usually closed for the winter season, will be opening up to host the crew of one of the world's largest battle ships.