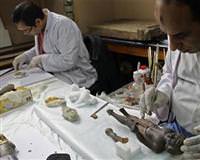 Egypt's Antiquities Ministry has recovered some of the national treasures that went missing from the Egyptian Museum during an uprising which unseated Hosni Mubarak, the country's top Egyptologist said Monday.

Items including a statue of King Tutankhamun and objects from the era of the Pharaoh Akhenaten went missing when looters broke into the museum during mass protests that engulfed the streets around the museum in central Cairo.

But Zahi Hawass, recently named minister of state for antiquities affairs, said in a statement that some objects including a Heart Scarab and a small Ushabti statue were found.

Part of a coffin dating back to the Modern Kingdom 3,000 years ago was also found outside the museum.

"We found two of the eight missing artifacts outside the museum between a government building that got burned and the gift shop. We are continuing the search and will find more," Hawass told Reuters.

Artefacts still missing include a statue of Akhenaten's wife Nefertiti making offerings, a stone statuette of a scribe from Amarna and the torso and upper limbs of a gilded wood statue of Tutankhamun.

Hawass said thieves also attacked a storehouse near the pyramids of Dahshour 35 km (21.75 miles) south of Cairo on Sunday, the second attack on the site in days.