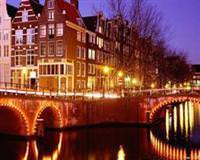 Holland’s Haarlem Court has ruled for Turkish citizens to be allowed to enter the country without visas and to stay up to three months.

The court ruling on a case opened by Turkish businessman Cahit Yılmaz, who was turned back from Schiphol Airport for not having a visa, has officially gone into effect as of February 14th.
According Yılmaz's lawyer Köse, the Dutch Justice Ministry and Ministry of Foreign Affairs may appeal the ruling. "However, until they do so, this ruling is valid."