Ancient port to be displayed at Yenikapı 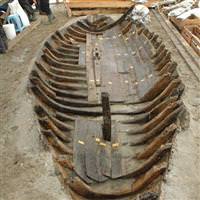 A collection of 36 sunken ships from the Byzantine era uncovered during the Marmaray excavation will be on display at the world’s largest underwater museum which is planned to be built in Yenikapı.

After almost six years of archeological digging, excavations of the 1,600 year old Theodosius port will soon be completed. The relics were first brought to light during construction work for the Marmaray Tunnel Project.
According to Istanbul University Yenikapı Underwater Project Director Ufuk Kocabaş, the excavation will be completed in the next year and a half. "The Yenikapı excavation is considered to be one of the most significant archeological discoveries in the world in recent years." Kocabaş goes on to state, "In plans for urbanization, the municipality will be establishing a culture park in Yenikapı, which will include a museum to display these underwater ruins."