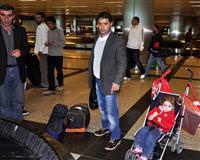 Following are details on some countries and companies evacuating their nationals and employees from Libya.

Foreign Minister Guido Westerwelle said all Germans remaining in Libya should leave the country. The Foreign Ministry would assist their repatriation where necessary.

Greece is watching the developments in Libya and is ready to repatriate Greeks who will officially request it, the Foreign Ministry said in a statement on Monday. The government would send military C-130 transport aircraft to bring them home, it added.

Italy plans to send a flight to Tripoli on Tuesday to bring back Italians who want to leave Libya, a Foreign Ministry source said.

The Netherlands is planning to evacuate its citizens from Libya on Tuesday with a military plane, Dutch Foreign Affairs Minister Uri Rosenthal said on Dutch television.

"We are doing everything to get the plane there. We are in contact with Tripoli. We assume the plane will be in Libya tomorrow and immediately take out the Dutch citizens," Rosenthal said.

There are about 150 Dutch citizens in Libya, the Foreign Affairs Ministry said in a statement.

Nearly 600 Turks were evacuated at the weekend from Benghazi where many Turkish firms are active. Anatolian news agency reported another 250 Turks were being taken by bus from eastern Libya to the Egyptian city of Alexandria.

Turkey's Foreign Trade Minister Zafer Caglayan said looters had attacked Turkish companies, which have projects in Libya worth more than $15 billion, and officials estimated there were 25,000 Turks working there.

The United States has ordered all non-emergency personnel to leave Libya. The U.S. State Department, also warning embassy family members to leave the country, said protests, violence and looting were possible during the next several days.

"We are now organizing to fly out our people out of Libya. There are a good 100 of them there, mostly in Tripoli," a spokesman said.

Russia's state-owned railroad company said on Monday that it was sending representatives to Libya to organize the evacuation its employees. It said there were 204 employees of Russian Railways and its subsidiaries in Libya building a railway line from Sirte to Benghazi.

In a statement on its website, Russian Railways said it was in contact with its employees in Libya and that all of them were safe.