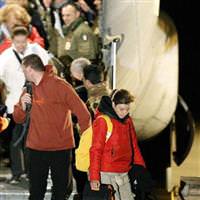 Following are details of countries evacuating nationals and employees from Libya or closing operations because of the political turmoil.

BOSNIA: Evacuation of Bosnians continued on Friday with 150 leaving Libya on Turkish boats from Benghazi and a number by air. Some 1,500 Bosnians lived in Libya. * BRAZIL: Malta harbour authorities said on Friday 3,000 Brazilian workers on a cruise ship were set to arrive overnight.

BRITAIN: Britain was drawing up plans to pull out British oil workers stranded in desert camps, Prime Minister David Cameron said on Friday. Six flights had left Libya in the past 24 hours carrying Britons, and the frigate HMS Cumberland had evacuated Britons and other foreigners from Benghazi, he said. * UK Foreign Secretary William Hague said the last British government-sponsored charter plane would leave Tripoli on Saturday. The HMS Cumberland will return to Benghazi, possibly on Sunday, to pick up any remaining Britons there, he said.

BULGARIA: Around 100 Bulgarians living in Benghazi are expected to leave on a Turkish ship which docked in Benghazi on Thursday but has not left because of bad weather. Earlier, 10 Bulgarian citizens were evacuated on a Romanian aircraft.

CANADA: Foreign Minister Lawrence Cannon said on Thursday nearly 200 Canadians had been, or were about to be, evacuated on planes and ships arranged by other nations. He said a C-17 military transport plane with 156 seats was on its way to Italy from Germany and would fly to Tripoli as soon as Libyan authorities gave permission.He also said a charter plane from Amman would arrive in Tripoli early on Friday. So far, 213 Canadians have said they want to leave Libya.

CHINA: China has evacuated 12,000, or about one-third, of its citizens, many of them workers for Chinese-run projects, official media said on Friday. * Nearly 1,000 Chinese crossed into Tunisia on Wednesday, and a Maltese ship carrying some 2,000 Chinese was expected to dock in Valetta later on Friday.

CROATIA: Croatia said 28 Croatian workers have left Benghazi on an Italian military ship bound for Malta. A plane from Zagreb landed in Tripoli and Croatian officials were trying to reach the remaining workers at three different sites. There are around 125 Croat workers still in Libya.

GERMANY: Military sources have said Germany is sending three ships to the Libyan coast to help evacuate German citizens. The military is sending a supply vessel "Berlin" and the frigates "Brandenburg" and "Rheinland-Pfalz", with about 600 soldiers aboard. They are currently anchored off Valetta.

GREECE: Greece has evacuated 227 Greeks and Cypriots from Tripoli and Sabha in Libya aboard three C-130 military aircraft. It has also sent two frigates to waters off Libya and the Greek island of Crete.

-- The El Venizelos passenger ship with thousands of evacuees aboard is expected to arrive in Heraklion on Friday. Two ships with a total of 4,500 passengers, mainly Chinese, arrived in Crete on Thursday. Greeks, Russians, Romanians, Ukrainians and Italians were also among the passengers. The government has said about 15,000 Chinese in total will be evacuated from Libya.

INDIA: The foreign ministry said it has sent a ship to Benghazi to evacuate at least 1,200 Indians and is seeking permission for its planes to land in Tripoli for other evacuations. There are 18,000 Indians in Libya, mostly in the oil, construction and health sectors.

IRELAND: Ireland is to try again to get a plane back to Tripoli. Irish media said an Irish air force plane returned to Malta from Tripoli with no passengers on board. There are around 70 Irish people in Libya, 54 of them Tripoli. Ireland confirmed on Friday that members of the emergency civil assistance team are on the ground in Tripoli airport and are making contact with Irish nationals at the airport and elsewhere in Tripoli. * ITALY: Italy's foreign ministry said it planned to send a C130 aircraft on Friday to evacuate remaining Italians in Libya. A naval operation was underway to evacuate 150 Italians in Misrata and another 1,100 have left Libya in the last few days. The rest were expected back within the next 48 hours. * NETHERLANDS: The Dutch foreign ministry said on Friday 50 Dutch nationals remained in Libya, 25 of whom were looking to leave. However, communication with them was tough and sometimes impossible as they were spread out throughout the country.

PHILIPPINES: President Benigno Aquino said on Thursday his government was making preparations to repatriate about half of the 26,000 Filipino workers in Libya, most of them working in the medical and oil and gas sectors.

-- The government has also set aside 100 million pesos ($2.3 million) to lease planes to ferry Filipinos from Libya.

ROMANIA: A plane left Bucharest for Tripoli on Feb. 24 and Romania has asked its citizens in Libya to confirm their plans to leave on an emergency basis. Foreign Minister Teodor Baconschi said there were 450 Romanians in Libya.

SOUTH AFRICA: South Africa said on Thursday it was arranging for a flight to evacuate some embassy staff and 30-40 nationals from Libya.

SOUTH KOREA: A chartered plane carrying about 200 nationals took off from Tripoli on Friday for Cairo and another is scheduled, the Foreign Ministry said. A total of 1,300 South Koreans were in Libya working for construction companies.

SPAIN: A Spanish armed forces plane carrying 124 people evacuated from Tripoli, landed in Madrid on Friday, a Foreign Ministry spokesman said. The evacuees included 40 Spaniards as well as Mexican, British, Canadian and Portuguese nationals. Spain is planning the evacuation of a small number of Spaniards from outside Tripoli, the spokesman said.

SYRIA: Syria has sent vessels to pick up Syrian nationals from different areas in Libya, in addition to continuing its flights to Tripoli. Minister of Transport Yarub Badr said two ships have been sent so far.

TUNISIA: Tunisia had at least 30,000 nationals in Libya. At least 7,000 have been able to leave. Tunisia sent five flights to Libya on Wednesday and two before that. Tunisia has scheduled a ferry to travel to Benghazi.

TURKEY: Libyan authorities declined permission for some 250 Turks to cross the border into Tunisia late on Thursday. Turkey has evacuated 8,360 of its citizens on two ships and 26 planes, the prime minister's office said. It was sending a further 12 planes to Libya on Friday, including eight military aircraft.

-- A military ship with a capacity of 1,500 passengers is expected to set sail on Friday from Benghazi for Marmaris in southwest Turkey. Two ferries with a total capacity of 2,000 passengers were en route for Libya, carrying food supplies and security and health personnel. * UNITED STATES: A U.S.-chartered ferry, Maria Dolores, carrying more than 300 passengers, more than half of them U.S. citizens, arrived in Malta after being delayed by high winds and choppy seas. Another catamaran carrying more U.S. citizens was due to dock later in the day.

-- Separately, the State Department said a chartered aircraft would leave a Tripoli airfield on Friday for Istanbul.

VIETNAM: Vietnam has evacuated about 1,300 of its citizens from Libya out of 10,482 living and working there. The first 300 evacuees will reach home late on Friday. (Reporting by Reuters bureaux; Compiled and edited by David Cutler, London Editorial Reference Unit; Editing by Elizabeth Fullerton)