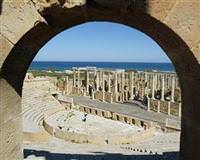 Libyans appear determined to safeguard their rich cultural heritage during the popular unrest against leader Muammar Gaddafi, protecting it from the looting seen in neighboring Egypt's revolution just weeks ago.

Conquered by most of the civilizations that held sway over the Mediterranean, Libya's rich cultural heritage includes Leptis Magna, a prominent coastal city of the Roman empire, whose ruins are some 130 km (80 miles) east of Tripoli.

The birthplace of emperor Septimius Severus, its amphitheatre, marbled baths, colonnaded streets and a basilica are considered the jewel in the crown of its Roman legacy.

While communication with Libya difficult sketchy amid the uprising against Gaddafi's four decade rule, two archaeologists who frequently work in the country said cultural artifacts appeared to have been spared the ravages suffered during Egypt's recent revolt.

"So far there are no records whatsoever of any areas from the cultural heritage of Libya being affected by the troubles," said Hafed Walda, a Libyan who advises the country's department of antiquities and once led an excavation at Leptis Magna.

"We're always worried about this in terms of chaos. It's going in the right direction so far but I'm not sure it will carry on like this. I don't know," he said from his London base.

In January, looters broke into the Egyptian Museum, home to the world's greatest collection of Pharaonic treasures, smashing several statues and damaging two mummies, while police battled anti-government protesters in the streets.

An Egyptian crossing into Tunisia told Reuters on Saturday that Sabratha -- an ancient Roman town with an amphitheatre and reconstructed theater where Benito Mussolini watched performances during Italian colonial rule -- was in the hands of civilians, but the information could not be corroborated.

The Benghazi-based newspaper Quryna had reported earlier in the week a large number of government troops had deployed there.

"Libya is my second home and all this is the worst nightmare," said British archaeologist Paul Bennett, in Libya three weeks ago in the Cyrenaica region where protests began.

"I hear stories of looting from work camps and alike, these are all relatively remote areas and I suspect local militia are keeping control in villages and towns.

"There are roadblocks ... local people are protecting their property and their neighbors and in doing so are looking after the cultural heritage as well," Bennett, who is also head of mission at the Society of Libyan Studies in London, said.

He said a team of archaeologists had been evacuated a few days ago and he was in touch with friends and colleagues there.

"All seems to be ok. I don't have particular concerns that museums will in any way be affected by all this," he said.

"I'm confident local people will protect (them) and the department of antiquity staff will ensure everything is in order and kept safe." The department in Tripoli was not reachable for comment.

Libya's archaeological work began in earnest in the 1930s when fascist Italy, the colonial power, hoped to demonstrate the Roman presence and prove Italy's historical dominance of the Mediterranean. That work also led to the discovery of oil.

Archaeology took a back seat after Gaddafi's 1969 revolution although some foreign archaeologists continued work, making finds even during the low point of relations with the West.

"It's been neglected by the regime for quite a while. At one time it was seen as not Libyan heritage as such but imperialist," Walda said.

The Gaddafi government had sought to improve resources and infrastructure in recent years, he added, amid efforts to develop tourism.

"I'm hoping attitudes will change -- we want the department of antiquity to be seen as part of the Libyan identity and the future of Libya," Walda said.

Both he and Bennett said they hoped to return to Libya. "We can only hope the situation will stabilize and we'll be back working together very soon," Bennett said. "That's my dream anyway."