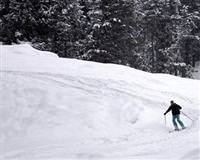 They are also flying foreign skiers to ski slopes near a ceasefire line that divides the Himalayan region between India and Pakistan.

Ski operator Gulmarg Heliski started the heli-skiing service in January hoping to attract adventure tourists to Kashmir with separatist violence down in the region once a top tourism destination popular with honeymooners, skiers and trekkers.

The region attracted about a million tourists a year until 1989, when simmering anger against New Delhi's rule burst into a violent rebellion.

But years of separatist violence across the Muslim-majority region ensured visitors stayed away even though authorities built a spectacular cable car network running through forests of towering pine trees to attract skiers to Gulmarg.

"Gulmarg is an adventure destination. There are endless possibilities for heli-ski runs in this area," said Martin Jones, a New Zealander, one of the directors of Gulmarg Heliski.

"The future for heli-ski in Kashmir is very good, and Inshallah, we will return next winter with big business."

A little over 300 people signed up during the six-week season that ended early this week.

"There is hardly any violence. I think overall security situation has improved significantly, that is why Gulmarg is abuzz with foreign skiers," Billa Bakhshi, a Kashmir-based partner in the firm, said.

Behind Bakhshi, a number of Western tourists were strapping an avalanche transceiver to their chests before boarding the helicopter ready to ski in the Kashmir mountains.

"I have discovered a safe heaven for skiers in Himalayas, unparalleled adventure, amazing powder riding," said Lel Tones, a 40-year-old skier from California.

"Such spectacular terrain, I personally think access to these Gulmarg mountains for a skier is a special opportunity," she said.

Tourism returned in force to Kashmir in 2005 as violence fell after India and Pakistan began a peace process. Some 600,000 people visited the scenic region, most of them Indians. But numbers dropped off again since 2008 after massive anti-India protests broke out in the region.

Scores of protesters were killed and hundreds wounded, most of them in police firing.

The armies of South Asian neighbors India and Pakistan, who have gone to war twice over Kashmir, regularly exchanged artillery fire along the disputed border until they declared a ceasefire seven years ago.

Jammu and Kashmir officials said they expected skiers to return next winter.

"Kashmir is safe and everything is normal. I am sure Gulmarg next winter will be house full," Nawang Rigzin Jora, Kashmir's tourism minister, said.