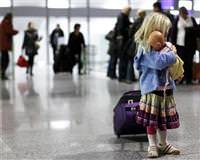 After a slump due to the recession the travel industry is booming again but any rebound could be threatened by a fuel price rise, travel experts said.

The mood was buoyant at the New York Times Travel show last week, which featured 500 destinations in 150 countries, but tensions in North Africa and the Middle East, soaring crude oil prices and airline fare hikes were making headlines as travel agents and tourist officials publicized their destinations.

"The big trend that is about to hit us is the rise in the price of oil. It is going to underlie everything," travel writer Pauline Frommer predicted in an interview. "That's the dragon looming on the horizon."

She usually advises travelers to wait a bit before buying a ticket to see what airlines are offering, but not anymore. She fears further price hikes could be devastating for the travel industry.

"We have already seen four upticks in the price of airfare just in the last month and a half, so I say buy your airfares now." said Frommer. "If oil goes higher there is no way the cost of tickets isn't going to skyrocket."

For author and European travel expert Rick Steves every indication is that things are on the uptake in the industry, with sales of his books having recouped to 2008 levels.

Italy is the European destination of choice for Americans, and Paris is the favorite city. And despite its economic and political woes, travel to Ireland is also strong.

"We call it Italy, with rain," said Steves.

But despite all the positive signs, he is also conscious of the impact of fare hikes.

"We're seeing all markets, primarily international, are up," said Ng, adding there is also a demand for warmer destinations, particularly Mexico and the Caribbean.

"The highest growth year to date is Europe, specifically Italy. It is coming back in strong double digit growth," she added. "People want to get away. There is still a lot of pent up demand."

The biggest indicator of good times for Ng is a rise in the number of travelers booking 90 days in advance, which has seen impressive growth.

Ng also advises travelers to book trips now. Even if there aren't more fare hikes an increase in demand will mean the best deals will go quickly.

"It is too soon to speculate but our hopes are that people continue to travel frequently and that the upswing that started in 2010 is maintained," she said.