A view of Istanbul for 15 TL 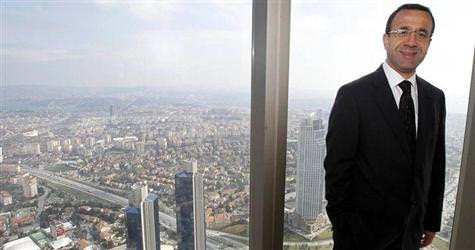 Visitors will be able to see striking views of Istanbul from Turkey’s tallest high-rise Sapphire which opened Friday in Levent.

Today the Istanbul Sapphire, the tallest high-rise in both Istanbul and Europe built by Kiler GYO and standing at 261 meter's high, is opening its doors. The 250-million dollar investment project realized, the Sapphire, boasts a shopping center, the Seyir Terrace as well as residences. Today's opening took place at 16:00 and was attended by Prime Minister Erdoğan. According to Kiler Groups' Chairman of the Board Nahit Kiler, residencies in Sapphire are for sale for between seven and 12 thousand dollars per meter-square. Noting that 60 percent of the residences available have already been sold, Kiler states, "We waited for the opening of the Sapphire Shopping Center and Seyir Terrace before selling the remaining units. We are expecting to see some activity in regards to sales towards the end of month. At the end of the March, we will increase prices by ten percent."

15 MILLION VISITORS
Meanwhile, in charge of renting out shop units for Sapphire, Jones Lang La Salle Turkey President Avi Alkaş states that 90 percent of the units, in a 30,000 square meter vicinity have already been rented. Explaining that they are preparing a shopping center that will be a combination of modern design with the more traditional market area and therefore they have also designated a separate level for such classic tastes as Vefa Bozacısı, Vonalı Celal Usta, Malatya Çarşısı, Mersin Yaprak Tantuni and the Çengelköy Baharatçısı.

TOURISM DESTINATION
Meanwhile, for 15 TL visitors can experience a view of Istanbul from the Seyir Terrace, situated on the top level of the high rise. According to Kiler, who emphasized that they didn't just want to make a building in Istanbul, but they wanted to make this building, "both domestic and foreign tourists will be able to see sights such as Kız Kulesi, Hagia Sophia, Bozdoğan Kemeri, Dikilitaş as well as both continents, both bridges and two seas. The Ministry of Culture and Tourism has approved this site as a tourism destination."