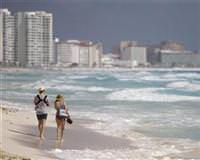 Starwood Hotels Chief Executive Frits van Paasschen told Reuters that he had not yet seen any effect on demand but warned that a continued rise could pose problems.

International oil prices hit a 2-1/2 year high recently, with U.S. crude staying above $100 per barrel due to unrest in Libya.

As long as major oil-producing countries such as Saudi Arabia keep supplying enough crude, the situation should be manageable, he said.

Cathay Pacific warned that high oil prices could hurt its results this year, and analysts said they expected that the Hong Kong-based carrier would follow rivals including Qantas Airways in raising its fuel surcharge.

Many airlines charge passengers more and hedge in the oil market as fuel costs soar, but price competition means they cannot pass all additional costs on to customers and instead take a hit to profits.

"Fuel hits you straight away, so that has adversely affected us. We don't lose money, but we're not making so much," President Tim Clark told Reuters.

German airlines Lufthansa and Air Berlin also said on Wednesday at the ITB travel conference in Berlin they were considering higher fuel surcharges.

In contrast to the airlines, hotel groups such as Carlson and Best Western, have not yet been affected.

They all said, though, that the situation was only manageable if the spike was temporary.

"If oil prices keep going up and get much, much higher, it could be a problem," Hilton CEO Christopher Nassetta said but added that he did not believe that current price levels would have a material affect on his company's business.

Another problem is the effect on travelers' mindsets and whether it will make them think twice about holidaying abroad.

The industry has already had to deal with the fallout from the Icelandic ash cloud, floods and earthquakes over the last year, along with the recent unrest in North Africa.

"For leisure travelers, there's a psychological effect, and they might change their destination," Carlson CEO Hubert Joly said.