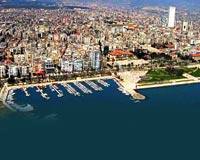 Prior to the 2013 Mediterranean Olympics in Mersin, Sheraton has rented out 20 stories of the 52-level Metropol, while Hilton is seeking out a second hotel.

With the announcement of Mersin as the hosts for the 2013 Mediterranean Olympics, requests by investors for land have begun to rain on the city.
Hotel investments in Mersin are especially on the rise, which is understandable due to the expectation of ten thousand people to come to the city, 6,000 of which will be competing athletes. While Sheraton has rented the top 20 floors of the 52-story high Metropol building, Hilton Worldwide is in deliberations to expand their four-star brand.
According to Mersin Chamber of Commerce and Industry Şerafettin Aşut, demand is coming in for hotels by businessmen from throughout Turkey.
"Properties are being sought out for new investments. We have heard that Hilton is looking to build a second hotel. There are also tourism operators from Mersin that want to collaborate on investments. In addition businessmen from Mersin have also come together and are telling us they want to make investments."