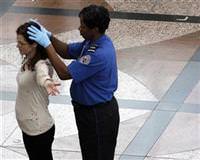 Despite being annoying, uncomfortable and invasive, most travelers say security patdowns at airports are necessary, but not everyone is convinced they would be effective in deterring an attack.

Nearly 85 percent of air passengers questioned in a global Ipsos/Reuters poll said the measures, which are considered by some to be a violation of human rights, are warranted but a hassle, although 40 of travelers say the measures would not catch anyone determined to cause harm.

Nearly a third say security procedures are too invasive.

"If you are traveling and you are a passenger your own personal safety is something that means everything, and as a result you are willing to put up with an inconvenient hassle," said John Wright, senior vice president and managing director, public opinion polling at Ipsos.

"It is a necessary part of traveling nowadays and I think it really comes down to how the individual handlers on the spot deal with it."

Wright likened the patdowns to cough medicines that taste bad but work.

In the United States patdowns are done if passengers refuse to walk through a full-body scanner, if something unusual is found on a scan, or if someone sets off a metal detector, according to the U.S. Transportation Security Administration (TSA).

The TSA estimates that only two percent of the 2 million passengers screened daily in the U.S. are given patdowns.

The Ipsos/Reuters online survey of 18,778 adults in 24 countries also revealed that about half of people around the globe think there will be more acts of terrorism this year than last.

Europeans, as a whole, were the most likely to anticipate an attack in 2011. Residents of Britain, Turkey, India and Mexico were the most convinced there will be more attacks this year than last, compared to the Saudis, Russians and Indonesians who felt the most secure.

Despite their fear of more attacks, 53 percent of Indians and 51 percent of Turks thought airport security checks were too invasive, compared to only 15 percent of Germans and a similar number of South Africans.

Only 19 percent of people around the globe think security should be less strict and half said the measures currently in place are fine.