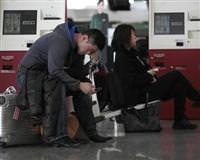 Following are travel warnings from several countries following the earthquake and tsunami in Japan.

Britain's Foreign Office advised against all non-essential travel to Tokyo and the northeast of Japan.

"Our advice is people should take their lead from the Japanese authorities," Foreign Office minister Jeremy Browne told Sky News. "The Foreign Office travel advice is not to go to that part of Japan in any case unless you have an extremely compelling reason for doing so."

France recommended its citizens leave the Tokyo region, citing the risk of further earthquakes and uncertainty over damaged nuclear plants.

A statement on the website of the French embassy in Japan noted that Japan's meteorological office saw a 70 percent chance of a strong fresh aftershock in the north of the Kanto (Tokyo) region in the next three days.

"We strongly advise our nationals not to travel to Japan and we strongly recommend delaying any journey planned," the embassy website said.

Germany's foreign minister advised Germans to consider if their travel to the Yokohama/Tokyo region was really necessary.

Canada warned its citizens to avoid all travel within 20 km of the Fukushima Nuclear Power Plant, and to avoid non-essential travel to areas of northern Japan that were near the quake and hit by the subsequent tsunamis.

Canadians were also warned to "exercise high degree of caution" in travelling to the Tokyo region because of damage suffered by its transportation, power and telecommunication systems. The warning note said there will be rolling blackouts in the Tokyo area starting March 14.

The South Korean foreign ministry has issued a travel advisory for Japan. It advised against travel to the Fukushima area and other areas north of Tokyo.