THY to offer additional flights from Tokyo 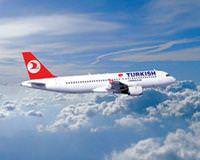 Turkish Airlines will be offering an extra flight from Tokyo to Istanbul this Sunday to assist Turkish citizens wanting to evacuate Japan following the devastating earthquake and tsunami.

According to an announcement made by Turkey's Tokyo embassy, in order to respond to requests by Turkish nationals that want to return to Turkey due to the recent earthquake and tsunami, Turkish Airlines will be adding an additional flight on Sunday, March 20th, which will depart from Tokyo's Narita Airport.
The announcement also states that Turkish citizens in Tokyo need to call Turkish Airlines' Tokyo office to receive further information on the flight price and schedule.