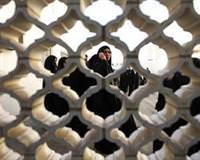 Bahrain warned its nationals on Tuesday not to travel to Lebanon for their own safety after Iranian-backed Shi'ite Muslim group Hezbollah came out in support of weeks of protests by mainly Shi'ite demonstrators.

Bahrain has withdrawn its top diplomats from Iran in a protest over the Islamic Republic's criticism of last week's crackdown on mainly Shi'ite protesters in the island kingdom.

The crackdown has also drawn sympathy protests in countries with Shi'ite populations, including Lebanon, where Hezbollah leader Sayyed Hassan Nasrallah criticised Arab states for backing Bahrain's rulers while supporting the rebels in Libya.

"Due to the threats and interference that Bahrain has faced from terrorist elements, it warns and advises its nationals not to travel to Lebanon because of the dangers they may face that may affect their safety, and it advises nationals in Lebanon to leave immediately," the Foreign Ministry said in a statement.

The ferocity of the crackdown, which banned protests, imposed martial law and called in forces from Bahrain's fellow Sunni-ruled neighbours, has stunned its majority Shi'ites.

More than 60 percent of Bahrainis are Shi'ites and most are campaigning for a constitutional monarchy; but calls by hardliners for the overthrow of the monarchy have alarmed Sunnis, who fear the unrest serves Iran.

Iran, which supports Shi'ite groups in Iraq and Lebanon, has complained to the United Nations and asked neighbours to join it in urging Saudi Arabia to withdraw forces from Bahrain.

Turkish Foreign Minister Ahmet Davutoglu, in a joint news conference in Ankara Tuesday with Bahrain's foreign minister, said: "It is very important that the civilian population is protected and that the civilian population and security forces do not confront one another ... A sectarian clash would harm the intense process of change in the region."

He said the intervention of foreign forces in Bahrain must be temporary.

Bahrain's Foreign Minister Sheikh Khaled bin Ahmed al-Khalifa said: "Foreign forces are only there to protect state organs" and would be there for a "very limited" time.

It said Britain supported political dialogue that the Bahraini government says it is seeking to establish and encouraged all parties to take part in those talks.

Cameron said Bahrain's approach "needed to be based on the principle of reform to address the legitimate aspirations of the people of Bahrain."

Bahrain complained to the Arabsat broadcaster Sunday over "abuse and incitement" on Iran's Arabic-language Al Alam television, Hezbollah's Al-Manar and Shi'ite channel Ahlulbayt, which are all carried by Arabsat.

Bahrain's political crisis has been the subject of a media war between pro-Iranian channels and Bahraini state television. Both have accused the other of incitement.

Bahrain also condemned a protest outside the Saudi consulate in Tehran, after reports Saturday that some 700 demonstrators broke windows and raised a Bahraini flag over the gate.

One Lebanese resident of Bahrain said Tuesday he had initially been denied entry to the country when he tried to return from a brief business trip.

At least 1,500 Lebanese live in Bahrain and a group of expatriates issued a statement Sunday, distancing the community from Nasrallah's comments.