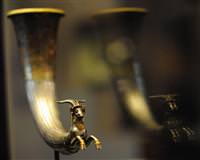 Bulgarian mogul Vasil Bozhkov is opening up his private collection of rare Thracian artefacts, offering a glimpse of a little-known ancient civilization which has left no written records.

"Thrace and the Ancient World" runs until June 21 and shows over 200 artefacts including objects of Greek classical art, some of which are being displayed in public for the first time.

The oldest article in the exhibition dates back to the 15th century B.C.

Not much history has survived of the Thracians, who some experts say lived in what is now Bulgaria, Romania, northern Greece and Turkey's European territory from as early as 4000 B.C. until being absorbed by the Roman Empire in 46 AD.

But archaeologists have discovered a large number of artefacts in Bulgaria's Thracian tombs in recent decades, which provide most of what is known of the civilization's culture, as it had no written language and produced no lasting records.

The centerpiece of the exhibition at the National History Museum is 20 rhytons, drinking vessels each with a pointed end shaped like an animal or an animal's head, for which Bozhkov has a particular passion.

An ardent art collector, he is among the richest businessmen in eastern Europe, with interests ranging from gambling to road construction.

When the exhibition in Bulgaria ends, organizers are considering sending it to The Louvre museum in Paris.