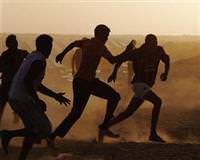 Sitting in a Tunis hotel lobby, a Libyan businessman just arrived from Tripoli repeatedly refuses interview requests from TV journalists to talk about events back home.

"They are asking me but I refuse. I don't want to be recognized," the businessmen said. "I still have family in Libya, if I talk, they will burn them, do you understand? Burn them."

The businessman said his wife and children were still in Libya and while he was willing to provide details about life in Tripoli, he would only do so if he was not named.

"What they are doing there is just horrific but I can't say it publicly. They will hunt down those close to me."

Even once they have fled their country, many Libyans refuse to speak openly about the revolt against Muammar Gaddafi for fear of what could happen to relatives at home.

Gaddafi's opponents say fear has been a very effective tool for the leader, who has survived coup attempts and assassination plots during 41 years in power. That fear has followed many Libyans abroad.

"Of course people are scared, the situation is uncertain," another Libyan, who arrived last week in Tunis, said.

"Gaddafi has always treated his people like ants, so they are scared until they know he is no longer there." Hundreds of Libyans protested outside their embassy in Tunis last week, calling for Gaddafi to step down. But when they were approached by camera crews for interviews, many refused and those who agreed to speak covered their faces.

Rights groups have found evidence of serious abuses by Libya's security forces since the revolt against Gaddafi broke out last month, including disappearances and deliberate killings of bystanders and protesters.

Gaddafi and his officials say the rebels are al Qaeda militants who are trying to destroy the country. They deny targeting civilians.

In Tripoli, some ordinary people have become overwhelmingly anti-Gaddafi, even through most keep their discontent to themselves for fear of retribution if they speak candidly to reporters in the street.

Hundreds of Libyans cross the Libya-Tunisian border daily, aid workers say, but few have asked for assistance. Family and tribal ties straddle the border, with a long healthy trade of fuel and food between the two countries.

"It is difficult to determine whether they have to seek shelter or are going to see family," said Marc Petzoldt, a representative for the International Organization for Migration.

But if they are fleeing fighting, air strikes by the Western coalition or hoping to wait out the crisis, Libyans arriving at the Ras Jdir transit point share little with media or aid workers there. "They just don't talk," one Tunisian aid worker said. "Many are wealthy and just stop to refuel and drive on."

In contrast, foreign refugees arriving at Ras Jdir have told of brutal treatment from pro-Gaddafi troops who looted them of most of their possessions. Fleeing young African men have given accounts of how Gaddafi troops rounded up black African migrants to force them to fight rebels.

One Libyan man who arrived with his family at Ras Jdir was asked what was happening on the other side. He simply said: "The road was fine, no problem."