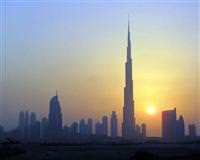 Regional turmoil is creating an unexpected boom for Dubai as tourists and businessmen flock once again to the shopping and skyscraper oasis after fleeing just a few years ago in the wake of its spectacular debt debacle.

Visitor numbers are noticeably higher in Dubai's gleaming malls and restaurants, and hotels are ecstatic as rooms fill up and deals are done.

"It has been a windfall. There are 65,500 hotel rooms and apartments in Dubai, and they were all full. There was not a single one available," said Guy Wilkinson, managing partner at Viability Management Consultants, a hospitality consultancy.

"Dubai occupancy has been better, unfortunately, since the unrest started. It lives a charmed life through big events in the region."

Occupancy rates have surged for hotels and hotel apartments in the emirate since a wave of unrest hit the region. Hotel occupancy in Dubai increased by 7.9 percent in January compared with the same month in 2010, data from STR Global showed. February data is not yet available.

However, Dubai is still off its peak, when free restaurant tables and taxis were as rare as water in the desert.

The main driver, however temporary, appeared to be business.

"We're seeing a number of clients, particularly among large multinationals, that have moved people and operations to Dubai," said Nabil Issa, Dubai-based partner at law firm King and Spalding. "The common theme is becoming 'get them out of Bahrain and send them to Dubai for a while'."

Issa said the flow of deals has virtually dried up in Egypt, Bahrain and Oman, prompting banks and other international businesses to switch their attention to Dubai.

"It's become the place to meet with one another and negotiate a deal," said one Bahrain-based public relations executive who had moved operations temporarily to Dubai.

"You'll see the coffee shops at the (Dubai International Financial Center) and boardrooms are full with business executives trying to close deals that may have been delayed if they had waited it out in Bahrain."

Clubs and restaurants catering to the financial industry are witnessing an influx of clients from countries affected by unrest.

"There are members from our club in Bahrain who have moved to Dubai temporarily and they are using the club here frequently," said Russell Matcham, chief executive of Capital Club Limited, which runs Dubai's Capital Club.

"We have also seen senior Saudis more in the club recently as Bahrain has been off limits. Interest in membership has increased dramatically and we are getting three or four enquiries per day."

A DRAW FOR TOURISTS

Besides businessmen, tourists are staying away from travel hotspots such as Egypt's Sharm el-Sheikh, now known as the beach town where President Hosni Mubarak fled at the height of the uprising. Tunisia, seen as ground zero for regional unrest, is also off the tourist map.

"We changed our plans when we saw TV pictures of the huge rallies and violence in Egypt. We originally wanted to head to Sharm el-Sheikh," said Reinhold Fleischhacker from Germany, as he boarded a sightseeing bus at the Dubai Mall with his family.

Dubai has world's tallest building, Burj Khalifa, the Gulf's only indoor ski slope and has built an artificial palm-shaped island complete with resorts.

Even more extravagant projects were being dreamt up when the cranes came to stop and construction sites fell silent when the asset and property bubble burst as the global financial crisis drew easy money away from Dubai and the region.

The unexpected influx of business and tourism -- in other words cash -- is a welcome boost for the emirate, which has struggled with an estimated $115 billion debt thanks to the collapse of the real estate market.

The International Monetary Fund expects the Dubai gross domestic product to rise by 2.8 percent this year, compared with 0.5 percent in 2010.

Dubai might be one of the few places in the region to see growth increase on a year-on-year basis amid political turmoil in the Gulf, said Rachel Ziemba, senior research analyst at Roubini Global Economics.

Ziemba cautioned that the initial boost might not herald a long-term positive outlook for the emirate.

"Dubai and, more broadly, the UAE is somewhat sheltered and could see some benefit of tourism flows," she said. "However the scope of the unrest and particularly its escalation to regions like Bahrain means even Dubai is not immune."