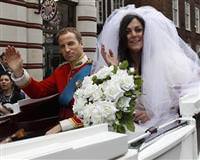 Thousands of street parties will be held across Britain to celebrate Prince William's marriage to Kate Middleton next month, local government officials said on Saturday, as royal wedding fever grips parts of the country.

In London alone, some 500 requests have been made to councils to close down roads so locals can get out the bunting and set up their fold-up tables for the traditional get-togethers, held in honor of major state occasions.

"Street parties are an established part of British culture, they're a great way for people to meet their neighbors and strengthen community bonds," said Chris White from the Local Government Association (LGA).

In total, some 4,000 applications for parties have been made so far across England and Wales, the LGA said.

According to Britain's Mirror newspaper, one of the applications has come from Prime Minister David Cameron for a party outside his official Downing Street residence.

Elsewhere, those living in the county of Hertfordshire, north of London, are proving particularly excited by the upcoming nuptials, making 135 requests for street parties, while there have been 85 from Kent to the southeast of the capital.

However, there appears to somewhat of a north/south divide, with fewer applications being submitted to northern councils.

Places such as Blackpool, the seaside resort in northwest England, and Gateshead, in northeast England, have recorded just one request each.