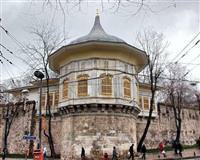 The Gülhane Alay Kiosk, which was built as a location to watch the Ottoman Sultans in procession ceremonies, will soon become a literature museum. The library will also include a coffee house geared especially for literature enthusiasts.

Within the framework of the Ministry of Tourism and Culture's project of initiating the opening of 'Literature Museums' throughout the country, the historical Gülhane Alay Kiosk building located along the outer walls of the Topkapı Palace, will soon become the Ahmet Hamdi Tanpınar Literature Museum and Library. The historical building, which was restored in 2007 and whose usage rights belong to the Ministry of Culture and Tourism, was emptied out in recent weeks in order to begin work on transforming the site into a museum.
MUSEUM ON THE TOP, COFFEE HOUSE ON THE BOTTOM
While the top floor of the two-level building will function as both a library and a museum, the entrance level will operate as a coffee house for literature lovers. The museum, which is being named after one of the most significant figures in Turkish literature, Ahmet Hamdi Tanpınar, will also include a corner devoted to the literary figure himself, containing personal effects as well as his literary works. At present the museum, which is expected to open within the month of April, is undergoing decoration work. The library will be open to the public and will house a number of literary works from Turkish literature's staples. The first installment of the 'Literature Museum' project, initiated by Minister of Culture and Tourism Ertuğrul Günay was opened in Ankara on March 12th under the name of famous literature writer Mehmet Akif Ersoy. At present efforts are ongoing to found the 'Karacaoğlan Literature Museum Library' in Adana, the 'Ahmet Arif Literature Museum Library in Diyarbakır as well as the 'Erzurum's Emrah Literature Museum Library' in Erzurum.
To live on in Tanpınar's name...
The Gülhane Alay Kiosk, which will be named after one of Turkey's most treasured literary figures Ahmet Hamdi Tanpınar, was built out of wood in 1460. When the kiosk was destroyed in a fire during the reign of Sultan Mahmud II, the structure was rebuilt as it is today. Used as a telegraph station during the founding of the Republic, the kiosk was then later restored in 2007 and the usage rights were granted to the Ministry of Culture and Tourism.