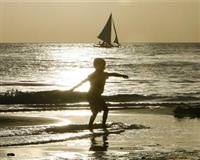 The tiny island of Providenciales in the Turks and Caicos has been voted the top beach destination in the world, according to the travel website TripAdvisor.

It ranked above such renowned beach destinations as Honolulu and Miami Beach in the report based on travelers' reviews and ratings to select the best destinations around the world.

Myrtle Beach in South Carolina was the only U.S. destination to make the top five.

"A number of factors make these beach destinations stand out as wonderful choices," said TripAdvisor spokesman Brooke Ferencsik. "In addition to featuring remarkable stretches of sand, these hotspots offer a wide variety of quality hotels, restaurants and activities to accommodate virtually any vacation budget, and appeal to any traveler type."

Providenciales, which has experienced a boom in high-end resorts with total visitors tripling since the mid-1990s, was praised for its pristine white-sand beaches, calm, clear water and a healthy barrier reef appealing to snorkelers and divers.

Many reviewers called its Grace Bay Beach the world's best.

Rounding out the top five were Boracay, in the Philippines, Aruba's Palm/Eagle beach, Negril in Jamaica and Tulum, Mexico.

The quaint, Victorian-tinged Cape May, at the southern tip of New Jersey, was the only other U.S. beach among the top 10.

Despite its glamorous, starry reputation, the French Riviera didn't even place among Europe's top 25.

In the South Pacific, synonymous with exotic beach travel for many, Bora Bora topped the list.

The top choice in Central and South America was Santa Teresa in Costa Rica, a country that has developed a reputation for eco-travel.

Nearly 70 percent of U.S. respondents said they were planning a beach vacation in 2011, and just over half were opting for a U.S. destination and about one-quarter were planning to visit the Caribbean or Mexico, according to recent TripAdvisor survey.