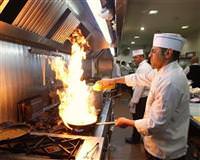 While Paris's Left Bank is famous for its fine restaurants and bustling cafes, Palestine's West Bank is not. But that might be about to change.

The hilly city of Ramallah, which lies just to the north of Jerusalem, has undergone a massive boom in recent years on the back of Western donor support, with new smart eateries and bars mushrooming alongside a plethora of pristine office blocks.

Latest data says Ramallah and the adjacent town of Al-Bireh that it has utterly engulfed have more than 120 coffee shops and some 300 restaurants, with 50 new diners opening in 2010 alone.

"When I started, I was competing with three to four other places, now I compete with many," said Peter Nasir, who turned an abandoned family house into a bustling restaurant in 2007, which draws around 150 customers a day.

Until recently a small town in the occupied West Bank, Ramallah has seen its population double in the last decade to around 100,000, and plays host to a growing army of NGO workers, diplomats and an increasingly wealthy, middle-class elite.

"These people need food, need to sit down and talk, need to hold receptions. This explains the increase in restaurants," said Mohammad Amin, head of Ramallah Chamber of Commerce.

The Palestinians dream of establishing a capital for their longed-desired independent state in nearby Jerusalem. But that city is fully controlled by Israel and with no Middle East peace deal in sight, Ramallah has rapidly risen to the fore.

The Palestinian Authority set up camp here when it was created in 1994 and is determinedly building an array of state institutions in the city in readiness for a wildly expected unilateral push for independence later this year.

NOT ENOUGH CAKE TO GO AROUND

Not everyone is happy with the accompanying boom in the service sector, and some long-standing businesses say there are not enough clients to go around.

"Ramallah is over-saturated with restaurants," said Nidal Hassan, who opened his establishment 'Stones' in 1999, a year before the outbreak of the second Intifada, or uprising, against the Israeli occupation that nearly destroyed the local economy.

'Stones' survived that dark period, only to suffer in the upturn, says Hassan, with his income plunging 40 percent in 2010 because of the "mad increase" in competition.

"There are new restaurants but we have the same number of restaurant goers. People should think twice where to invest their money," he added.

But other investors are more upbeat and see a rosy future for restaurants in a place which offers little competition when it comes to other forms of entertainment, with only one cinema to boast of and no public parks for picnics.

In addition, many Palestinians from adjoining East Jerusalem prefer to head into the liberal Ramallah for a relaxing evening, rather than stay in their own, tenser neighborhood, which has seen little development in recent times.

"This is a small country. We have no places for fun and entertainment besides the restaurants," said Jaber Khader, who opened 'Karaz', featuring French and Italian cuisine, in March.

The ever-expanding sector is also a good thing for local gourmets, ensuring that restaurateurs constantly have to up their game or else risk closure.

Many places at present offer similar menus of unadventurous Middle Eastern fare or bland international food and have no chance of winning a coveted Michelin star should the famous French restaurant guide ever come to town.

The growing number of eateries is not only bringing more variety but also a discernible rise in quality.

"Competition is good. It pushes us to be more creative," said Azure's Nasir, who nonetheless admits that the clientele is not growing as quickly as the number of new bistros.

"When there are few customers at my restaurant I know that it must be crowded elsewhere as the same people rotate around."