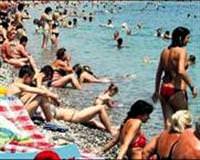 TÜROFED Vice Chairman Osman Ayık has announced expectations of two digit growth in tourism for both Antalya as well as for Turkey in its entirety.

According to Ayık, the number of tourists to visit Turkey this year is expected to reach 29-30 million.
"This is what the developments point towards. Turkey has already become a well-situated market in Europe, Russia and the Commonwealth of Independent States."
Expressing that these expectations are indeed realistic if based on opinions acquired during tourism fairs and tour operators, Ayık states, "This year, 11 million tourists will come to Antalya." Ayık also shares his estimation that the number of German tourists this year will reach five million. Ayık went on to state: "There will be significant increases in the Russian and Commonwealth of Independent States this year. Last year alone, four million 300,000 tourists came to Turkey from Germany."