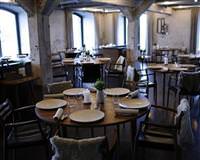 Danish restaurant Noma in Copenhagen was crowned the world's best restaurant for the second year in a row in an annual list, beating out top eateries in Spain, Italy, Britain, the United States and elsewhere.

The S. Pellegrino World's 50 Best Restaurants, produced by Britain's Restaurant Magazine, were unveiled in London after voting by a panel of more than 800 chefs, restaurateurs, journalists and food experts who rated Noma's leadership of a "new guard" of global cuisine.

Noma, located in a converted dockside shipping warehouse, toppled a four-year reign by Spain's El Bulli restaurant last year at the awards, often referred to as the "Oscars" of the restaurant industry.

"I think now we are as successful as we can be. Now we are working for the momentum of our region. It will be good for the other great chefs that are yet to be discovered. I think that will be the big impact."

Redzepi serves a new kind of Nordic cuisine such as musk ox and smoked marrow, sea urchin and dill or beef cheek and pear.

"We heartily congratulate Rene Redzepi for the difficult task of maintaining his position as the number one restaurant on our list, which underscores his commitment to redefining Nordic cuisine," Restaurant magazine Editor William Drew said in a statement with the winning results for the 10th year of the awards.

Drew said this year's list spanned a greater geographical spread than previous years and recognized the influence of "fledgling" culinary nations such as Peru and Russia.

"I think the most important thing is recognising that young energy that's going to be the big chefs of the future," said Blumenthal, whose restaurant The Fat Duck in Bray, Berkshire is a previous winner of the accolade.

El Bulli was closed this year and therefore not included on the list, allowing El Celler de Can Roca and Mugaritz to clamber in behind Noma.

El Celler de Can Roca, run by three brothers, the youngest of whom is just 33 years old, has risen two places up the list this year to number two.

"The main thing is the fact that we are three brothers working together and the combination of all three of us makes it work well," oldest brother Joan Roca said through a translator.

Also up two places is Mugaritz, which is named the third best restaurant in the world, having recovered following a fire in 2010.

One of the most coveted awards of the night is the Chefs' Choice award. Voted for by his peers, this year's winner is Massimo Bottura, whose restaurant Osteria Francescana is one of the most talked about in Italy.

Bottura is rapidly gaining an international reputation for his avant-garde cuisine which although unashamedly modern, reflects traditional techniques and always pushes the boundaries of what's new, said Britain's Restaurant Magazine.