Van Gölü to become the Bodrum of the East 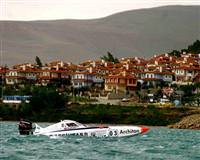 Van Governor Karaloğlu is already excited about plans to build a marina on the lake. In three years’ time, boats will be able to dock in Van Lake, and according to Karaloğlu, there will be no way to find room on the beach. Religious tourism and new five-star hotels are on the way…

Fast developing Van is literally experiencing a 'tourism attack'. While hotel after hotel continues to open, the state is also embarking upon a number of investments in the region. The most significant of which is the marina planned for Van Lake. Explaining the details of the project, Van Governor Münir Karaloğlu's eyes sparkle. Karaloğlu states, "The tender will be held next month, we have a ten million lira budget. In three years' time yachts will be docked in Van Lake. There will be no more spots available on the beach. As it is, people from the surrounding districts are already competing to buy locations along the sea. With the establishment of five-star hotels. Northern Iraqis and Iranians will no longer consider Van simply as a transit location to head to southern districts, but will soon choose to vacation here."
FAITH TOURISM TO EXPLODE
Reminding that for 3,000 years now, Van has been a center in Eastern Anatolia, Governor Karaloğlu states, "A mass was held for 5,000 people last September in the church in Akdamar, which was renovated. This church will continue to host this mass on the second Sunday of every September. The promotional venture Van has embarked upon, which began with faith tourism will also include health tourism in new projects."
Governor Karaloğlu states: "last year, 80,000 foreigners came to Van. We are going to bring this trend up higher each year. At present, there are two five-star hotels being built in Van. Hilton and a businessman from Van have already applied. Their locations are ready. Our real target in tourism is Iran. If we increase the number of facilities we will host a significant number of Iranians in Van."
NO MORE NEED FOR THE 'MONSTER'
Drawing attention to the enlivening of social life due to the eradication of the lacking of infrastructure, Karaloğlu also emphasizes that they have spent six million lira on establishing a ski center in Abalı, which is tied to the Gevaş district. Vali, "You can ski along the skirts of Artos Mountain while watching the Van Lake. What ski-lover would pass up the chance to ski witnessing this beauty Kayak, where else would they go?" Karaloğlu also went on to state that Van Lake, which is the world's largest soda lake, also hosted Turkey's Offshore Championship, "There is no longer the Van Lake monster, now there are only highly competitive Offshore monsters. This is now a sea where rowers, sailors and canoes wander." Also noting that 18 million liras were spent on building an Olympic pool in Van; Karaloğlu states that the tender for the 4,000 spectator-capacity Van Indoor Sports Center will be held in May.
650 MILLION ON ROADS
Also touching upon investments made regarding transportation, Governor Karaloğlu states, "The Van Lake's surroundings are 420 kilometers. The road from the borders of Van to Bitlis will be an entirely divided road. There is already a divided road from the North to Erciş. The road between Erciş and Adilcevaz is already 80 percent complete. Basically someone travelling around the Van Lake will be able to drive on an entirely divided road. Last year alone, the Highways 11th District Department spent 650 million liras on building a road in four provinces, Bitlis, Muş, Van and Hakkâri. The second tender for the Van Highway is also being held. The road inside Van no longer compensates for the traffic in Van. We will be building a highway along the east of Van that will span 41 kilometers."