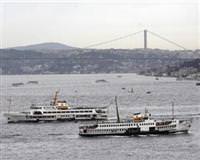 With a rush of churning water then a jolt, the Karaoglanoglu ferry docks at Karakoy passenger terminal on Istanbul's European shore and a familiar rite begins.

Young men dart from the waiting room and leap aboard before the gangway is fixed, racing for a prized spot on the benches just above the water.

Parents with children make for the top deck of the 34-year-old ferry, the best place for feeding the flocks of seagulls, who swoop to catch morsels of bread as they fly.

Huge changes lie in store for how the citizens of this growing city of almost 15 million people cross the Bosphorus Strait, which separates its European and Asian shores.

The government will shortly tender a third Bosphorus bridge, expected to bear rail as well as vehicles, and on the seabed giant tubes will encase a privately-operated commuter rail link, the Marmaray, and another a twin-deck road.

While these projects will offer speed, convenience, and landmark engineering, they are unlikely to capture citizens' hearts in the same way as the old-fashioned ferries.

Even the city itself acknowledges the affection in which the ferry boats are held.

Istanbul Municipality this month sold its high-speed passenger and vehicle ferries to a Turkish-Scottish consortium for $861 million -- but hived off the slower boats into a separate firm, Sehir Hatlari (City Lines), to be kept in state hands.

"Istanbul Metropolitan Municipality wanted to keep operating those lines as a public service," said Hamdi Ugur, Vice President at Finansinvest which advised the city on the privatization.

Municipal transport experts say the city is trying to invite large private investment but also segment the market and ensure affordability for its citizens whose income spectrum is huge.

"People would riot if we cut the ferries' journey time by even a minute," said Suleyman Genc, manager of City Lines, whose boats carry 150,000 people a day and charge 1.75 Turkish lira ($1.14) for the 20-minute crossing.

"It is the most pleasant form of transport in Istanbul."

A look at the expressions of content and repose aboard the Karaoglanoglu, as passengers drink dainty glasses of Turkish tea from the buffet, or photograph yet again the famous skyline, corroborates his view.

Elsewhere in Istanbul vehicles are lined bumper-to-bumper on the Bosphorus and Fatih Sultan Mehmet suspension bridges, crowded buses stand in grid-locked rush-hour roads, and taxi drivers honk in fury at the congestion.

"Istanbul is beautiful, the Bosphorus is beautiful, but the ferries make them even more beautiful," said Hasan Cebesoy, a 48-year-old civil servant sitting on the outside deck, crossing to the Asian side of the city.

The history of sea transport in Istanbul reflects the history of a city to which modernization and industrialization came suddenly.

At first a few solitary steam boats began to operate in Ottoman Istanbul's waters, but such was their popularity that by 1851 the state founded its own ferry company -- from which today's City Lines derives.

Turkish Nobel laureate writer Orhan Pamuk describes how the city's citizens doted on every ferry ever owned by City Lines and how his father could recognize each boat by its silhouette.

When the city needed to add to its fleet in 2005 it allowed the public to vote on their favorite model. They chose the vessel most closely resembling the ones they knew and loved.

"I always sit upstairs for the view and of course I find the old ferries the most beautiful," said 65-year-old pensioner Esmet Ulukut, fondly patting a wooden window sill.

The decommissioning in 2008 of the Fenerbahce ferry, built in Glasgow in 1952 and widely considered the most beautiful, sparked protests.

"That length of service is two or three times longer than the average life of a ferry," said Genc.

The vessels' unusual slender frame caters to the challenges of serving in one of the world's busiest shipping straits.

"Maneuverability is very important. They have to serve crowded harbors where at rush hour a ferry might be arriving every 15 minutes. They also need to unload and reload passengers very rapidly," said Ilhan Or, professor of industrial engineering at Istanbul's Bosphorus University.

Sea traffic will no longer grow in Istanbul, he thinks, largely because it is comparatively slow and the density of transit traffic in the Bosphorus keeps strict speed limits in place.

Genc believes new modes of crossing the Bosphorus will eventually hit numbers, but that a future for the ferries as a nostalgic tour service awaits -- much in the way a historic tram now transports tourists along Istanbul's busiest shopping strip.

"Although our passenger numbers will fall the number of tourists to Istanbul will increase. So in future we may focus more on tourist tours rather than commuter transportation."

"We already have a fantastic Golden Horn tour... but Istanbulites don't know about it."