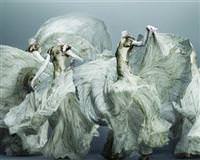 From an expertly tailored black silk jacket to a futuristic outfit, a retrospective at the Metropolitan Museum of Art chronicles the extraordinary career of the late British fashion designer Alexander McQueen.

With about 100 ensembles and 70 accessories from collections spanning 19 years, the Costume Institute exhibition "Alexander McQueen: Savage Beauty," reveals the inspiration behind his elaborate shows, his imaginative approach to fashion and the technical ingenuity and masterful constructions of his provocative creations.

"For McQueen, fashion wasn't just about wearability or practicality it was a vehicle to challenge our ideas, our concepts about fashion, to challenge our boundaries and challenge what we mean by beauty," said Andrew Bolton, the curator of the exhibition that opens on Wednesday and runs through July 31.

"He saw life very cinematically and I think that was reflected in his clothing."

The British designer who took his own life a year ago at age 40, described himself as a romantic schizophrenic, someone who found beauty in the grotesque and who sought to demolish the rules but to keep the tradition.

The retrospective is divided into seven galleries, or themes, such as the romantic mind, romantic gothic, romantic nationalism and romantic naturalism.

"I wanted the exhibition to unfold like a fairy tale, a Brothers Grimm fairly team. McQueen was deeply romantic in the Byronic sense of the word," said Bolton, who added McQueen's shows suggested avant-garde installation and performance art.

Black leather creations and accessories vie with soft flowing white chiffon gowns and lace or flower and beaded dresses for the viewers' attention in the retrospective.

Two of McQueen's earliest pieces in the retrospective are a black jacket, lined with red silk, and a coat from his 1992 design school graduation collection entitled, Jack the Ripper Stalks his Victims.

His training in tailoring on Savile Row in London is apparent, as is his approach to design, from the side of the figure to get "a cut and proportion and silhouette that works all the way round the body."

But it is at Givenchy in Paris, where McQueen worked as chief designer before founding his own label, that he said he learned to soften and lighten.

A billowing ivory silk gown from his autumn/winter 2006/2007 show Widows of Culloden, worn by model Kate Moss and captured in a hologram, is a dream-like creation, soft and floating.

McQueen's interest in history, patriotism and nationalism are featured in his works and shows, which each tell a story.

His Scottish heritage is reflected in his Highland Rape collection for autumn/winter 1995-96 with its torn McQueen tartan and green leather and in the Widows of Culloden collection, while his feminine autumn/winter 2008-09 show The Girl Who Lived in the Tree was inspired by the tree in his English country garden.

"In terms of designers who stretch our understanding of fashion and expand the boundaries of fashion, I do think McQueen was unique," said Bolton.