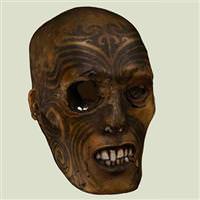 France on Monday handed back the tattooed, mummified head of a Maori tribesman to New Zealand authorities, marking the end of a years-long struggle by the Maori people to bring home their dead and lay them to rest.

Spiritual leaders chanted traditional laments to celebrate the restitution and rubbed noses with officials in Rouen, where the relic or "Toi Moko" had been kept since 1875 when it was given to the Natural History Museum by a private collector.

The head, believed to be that of a Maori warrior killed in battle, is the first of 16 that are to be sent back to New Zealand by next year after France passed a law in 2010 stating the remains should be allowed to return home.

"While Toi Moko have been curiosities for the public to enjoy, they are still our ancestors," said Michelle Hippolyte, a Maori spiritual leader and co-director of the Te Papa Tongarewa Museum in Wellington where the head will now be transported.

"This journey is about reuniting the Toi Moko with his homeland," she told reporters.

In a sign of respect, the head was kept hidden during the ceremony, and draped with a Maori ceremonial cloak, but a 3D digital model was displayed to show the markings, thought to symbolize status and nobility.

First discovered by explorers in the 18th century, Toi Moko became the object of a particularly barbaric trade in subsequent years due to the curiosity of European collectors and explorers.

While the markings were typically reserved for free men and warriors, in some cases Maori slaves were tattooed and immediately decapitated in order to meet a growing illicit demand for the exotic oddities.

"This is a great step forward in a vital ethical debate over our museum collections, and above all over human remains that were at times acquired illegitimately," said Valerie Fourneyron, Mayor of Rouen.

New Zealand first began its quest to recover the heads in the 1980s, but the dispute came to the fore in France in 2007 when the city of Rouen voted on its own initiative to hand its Toi Moko back.

The decision sparked years of wrangling and discussion, with French cultural officials opposing the move saying it would mean the departure of prized archaeological treasures.

Meanwhile, a number of countries, including Germany, Switzerland and Australia, all agreed some years ago to hand the sensitive artefacts back.

"Today is a fabulous moment where we have at last recognized the history and story of the Maori people. France has been very slow in doing this," said Fourneyron.

The head will be flown back to New Zealand where experts will attempt to interpret the markings and determine whether it is the head of a warrior, or whether the tattoos were applied post-mortem to feed the illicit trade.

It will then be buried in its native land in a traditional Maori funeral ceremony.