Bookish Buenos Aires gets own Tower of Babel 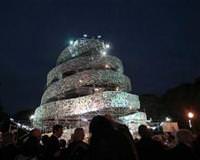 A spiraling tower made from thousands of books in dozens of languages is the latest landmark to dot the skyline of Buenos Aires, named the World Book Capital this year.

Called the Tower of Babel, the 82-foot (25-meter) high installation by Argentine artist Marta Minujin is made from 30,000 bricks, donated by readers, libraries and more than 50 embassies.

Climbing up its seven floors of metal scaffolding, visitors to the tower hear music composed by Minujin and the voice of the artist repeating the word 'book' in scores of languages.

On the walls, Japanese children's books are packed next to adventure tales from Patagonia or a Basque translation of Argentina's epic cowboy poem Martin Fierro.

"Building this tower has been a miraculous experience," Minujin told Reuters Television, standing before the structure as curious passersby gazed on in a downtown city square.

"A hundred years from now, people will say 'there was a Tower of Babel in Argentina ... and it didn't need translation because art needs no translation.'"

Minujin, who worked with American artist Andy Warhol, built a full-scale model of the Parthenon in Buenos Aires in 1983 using books banned by the military dictatorship that ended that year.

"We've been laying books for 10 days straight," Sebastian Atienza, 26, who works for the company that built the tower under Minujin's supervision. "But it's worth it. It's where all languages come together."

When the exhibit ends later this month, Minujin said literature lovers will be allowed to come and pick one book each.

The rest will be brought down to start a new archive that she has already been dubbed The Library of Babel, the name of a story by Argentina's most famous author, Jorge Luis Borges.