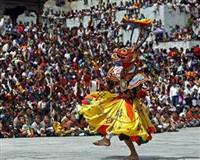 The Himalayan kingdom of Bhutan is becoming increasingly popular for well-heeled travelers keen to explore this remote and unspoiled Buddhist Shangri La.

Surrounded by mountains and flanked by India and Tibet, this tiny country has only been opened to tourism for a few decades and its traditional way of life remains miraculously preserved despite the growing prevalence of mobile phones and cable television.

While tourists are lured to Bhutan for a break from the 21st century, the country is also uniquely progressive. Tobacco is illegal, plastic bags are banned, and traditional economic indicators are shunned in favor of Gross National Happiness.

The expensive price tag ($200 per person per day) has kept budget travelers at bay, but the cost includes all meals, accommodation, guide, driver and car. Contrary to popular belief, there is no quota on the number of tourists allowed per year although hotels and airline seats fill up fast.

5 p.m. - Marvel at the view from your Druk Air window seat at one of the most spectacular commercial airline descents in the world as you make the hair-raising landing in Bhutan's steep Paro valley. Meet your guide after clearing customs.

The 1-hour journey to Thimphu follows a river through idyllic countryside, taking in paddy fields and villages featuring Bhutanese-style architecture.

6 p.m. - Arrive in Thimphu, a charming city which boasts of being the world's only capital without traffic lights, and where white-gloved police direct traffic by hand. Walk into town to soak up the village-like atmosphere at dusk where monks with mobile phones mingle with government officials wearing traditional 'ghos', a knee-length robe worn by Bhutanese men, and young modern Bhutanese playing carom, finger snooker, in bars. Wander into shops selling handicrafts, prayer flags and textiles.

7 p.m. - Eat dinner in one of the local restaurants around Clock-tower Square. Chillies are the staple of Bhutanese dining and feature in almost every meal along with red rice. Buffet-style dining is popular for tourists and common dishes include chicken, dried beef, lentils and dried vegetable spiced with chilli and cheese.

9 p.m. - You don't travel to Bhutan for the nightlife but if you are still keen to party, ask your guide to take you to one of the town's friendly bars or karaoke clubs.

7 a.m. - After a huge buffet breakfast at your hotel, strap on your hiking boots and meet your guide for an early start. Drop into Thimphu's National Memorial Chorten, an impressive monument to a former king, and soak up the enormous prayer wheels and watch locals in colorful traditional dress. Take in views of Bhutan's impressive Taschhhodzong or parliament building.

If you have time, visit one of the local Thanka-making houses where intricate Buddhist tapestries are hand-sewn.

11 a.m. - Take the winding roads back into the Paro Upper Valley to begin the steep trek to the famous Taktsang or Tiger Nest Monastery. This cluster of buildings hanging off a sheer cliff face 900 metres above the valley below is Bhutan's most photographed attraction. It involves a strenuous hike through lush pine forests and groves of prayer flags for one to two hours but the reward is worth it.

1 p.m - Rest and enjoy lunch at the wooden teahouse halfway up, taking in spectacular views of the monastery and the valley below. Tackle the steep path to the top, passing the Snow Lion Cave and a waterfall. Explore the labyrinth of chapels inside the monastery and watch the monks, who spend large parts of their lives meditating at the top of the world.

4 p.m - Drive back to Paro to check into your hotel and rest your feet after the long climb. Paro offers a range of accommodation nestled in pine forests or by rivers and many rooms have scenic views across the valley. The most popular at the high-end is the Uma Como. (www.uma.paro.como.bz/).

An increasing number of hotels feature luxurious spas where tourists can ease any aches and pains from long days trekking with hot stone massages and other treatments.

7 p.m. - Enjoy Bhutan beer -- Druk 11000 is a popular and potent brand -- from your balcony overlooking the valley before either venturing into town or enjoying dinner by a roaring fire at your hotel.

9 a.m - Reward yourself for yesterday's hike with a large buffet breakfast in your hotel before meeting your guide to explore the picturesque Paro valley.

10 a.m. Archery is Bhutan's national sport and a great spectator event. Drop by the Paro Archery Grounds to watch local men in traditional dress hitting impossibly distant targets. The sport is laced with ritual and the competitive singing and dancing which follows each round is more fun to watch than the archery itself. Some hotels will organize archery lessons.

11 a.m - Drive up to Paro's National Museum, an old watchtower perched above the town, and inspect the ancient artifacts which illustrate Bhutan's rich history. From here it is a short walk downhill to the Paro Dzong (Rinpung Dzong), an enormous fortress-monastery built in 1646 which featured in the movie The Last Emperor. It is also the site for Bhutan's famous Tsechu, a spectacular festival held each spring where thousands come to see the elaborate costumes and dances which recreate stories from Buddhist mythology.

1 p.m - Lunch in Paro town and spend the afternoon visiting the weekend food market or wandering around local shops. Relax in the town square and take final photos of locals in traditional dress before departing for the airport.