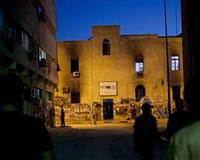 Down narrow rubbish-strewn alleys or wedged between concrete buildings, an occasional Italian or Ottoman architectural gem hints at drab and dilapidated Benghazi's cosmopolitan past.

The decaying structures in the east Libyan city are a symbol of the neglect the people of the region say they suffered under Muammar Gaddafi, whose control of Libya's east was ended by mass protests and an armed uprising in February.

Now that his writ has ended, Benghazi can openly lament the damage and isolation that 41 years of his rule has wrought.

"There was once a beautiful Turkish souk here. I remember in the 1980s when the shopkeepers were forcibly evicted, some under gunfire, before it was demolished," said Abdullah Hassy, 43, who lives in what could be a stunning Benghazi square.

On one side of the square is a local government building in use before Gaddafi overthrew King Idris in a 1969 coup.

An ornate mixture of Italian and Turkish styles and comprising a clock tower, the building seems set to collapse, its interior full of rubbish, graffiti and reeking of urine.

Once a pretty city of souks, Italian colonial buildings and Ottoman villas, Benghazi suffered heavy bombing by the allies in World War 2. Four decades of Gaddafi's quasi-socialist rule have been equally unkind.

Modern Benghazi is mostly made up of utilitarian concrete blocks and patches of waste ground. The few relatively glitzy structures, such as hotels, are business interests of Gaddafi or those close to him.

"This Ottoman mosque was restored by the worshippers, not Gaddafi. The only buildings Gaddafi cared about were the ones related to him," said Hassan Joudah, 20, pointing to a yellow mosque on the other side of the square.

Gaddafi took better care of the capital Tripoli in Libya's west, and his home town Sirte, which state largesse has transformed from a nondescript village into a mini-city, home to government institutions and a showcase for his power.

Leading away from the square are Italian-style shopping colonnades topped by shuttered windows and curved iron Juliet balconies. At the end of the northern colonnade lies perhaps the most potent symbol of the city's neglect.

A cavernous double-domed Catholic cathedral dominates the city's waterfront, and in an adjoining wing statues lie in open crates like coffins, while stone friezes depicting Christ lie in open boxes on the floor.

The wing's windows are long gone and its door has no lock, leaving the artwork open to the elements and passers-by.

Built in the 1930s under Italian occupation, the cathedral has not been used for decades, its interior damaged by fire.

Shafts of sunlight from cracked stained glass windows pierce the charred gloomy interior, highlighting floating motes of dust. The floor is a sea of feathers and bird droppings.

Wali Saleh, head of Benghazi's council for the preservation and restoration of old buildings, said the friezes and statues were removed and packed away after the fire.

He said his appointment in April last year under Gaddafi'ss rule was part of his administration's belated attempts to stop the architectural rot in Benghazi.

"There was some younger blood coming up in Gaddafi's administration, and they started to pay attention to the old buildings, from a historical and tourism perspective," he said.

On taking his post, he blocked the destruction of old buildings and commissioned a survey, finding 173 old structures in Benghazi in need of protection.

There are signs of some rudimentary restoration work, with scaffolding propping up the Benghazi local government building and parts of the cathedral, but Saleh said work stalled due to bureaucratic problems with Tripoli and a lack of funds.

With Benghazi's new rebel leadership struggling for finance, it is unlikely that further restoration will take place any time soon, but Saleh is hopeful.

"There's been a change of mentality. When I speak to the new executive, they all seem to love this city and are sad about what's happened to it," he said.

"They seem really keen to preserve Benghazi, and tie its new future to its past."