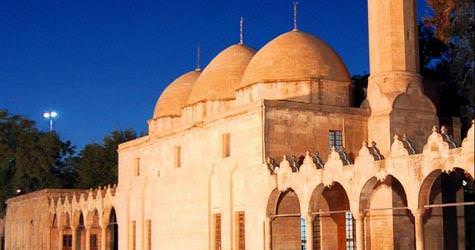 A fast-growing Şanlıurfa has set its sights on getting a piece of the tourism cake. The city, which is an important tourism center due to its historical and cultural make-up, aims to draw in one million tourists a year.

Şanlıurfa is very close to realizing the dream of becoming the region's growing star. One of the most important indicators of this fact is the recent explosion of investments in the city. Industry based investments are transforming the profile of the city and the figures are quite impressive.
Within the past two years, the city has raked in over 300 million dollars in tourism as well as over 100 million dollars worth of industrial agricultural investments. Furthermore, for the first time in Şanlıurfa's history, the city has begun to break exporting records. According to Şanlıurfa Chamber of Commerce and Industry (ŞUTSO) Chairman Sabri Ertekin, there are plans to add another organized industrial site to the one at present. Ertekin states, "Şanlıurfa is creating a new industrial strategy. We are going to focus our energy on sectors in which we have a competitive advantage. Both tourism and agriculture based industrialization are at the forefront." With ten percent of the country's cultivatable land located in Şanlıurfa, this prosperity is planned to be reinforced by the 2012 Güneydoğu Anadolu Project. When the mega project is complete Şanlıurfa will have a one million 60,000 hectare area irrigated. Tourists flocking to Şanlıurfa from all over the country are also reviving the city's restaurants and shopping centers. It's now impossible to find a hotel without having reservations. Five years ago, the number of tourists was in the tens of thousands whereas now, that figure surpasses 450,000. In addition, the city has had the opportunity to promote itself through hosting a number of international organizations. The new objective is to bring the number of tourists up to one million.
EXPORTS AND TRANSPORTATION JUNCTION
Şanlıurfa connects to one of the most important junctions in the country's highway system, the Gaziantep-Şanlıurfa-Nusaybin-Cizre-Habur road not only connects the city to the southeast and southwest, but it also provides access from Gaziantep to the Eastern and Central Anatolian regions. Coming from Adıyaman and Diyarbakır and connecting in the northeast of Hilvan, it's possible to pass through Şanlıurfa to continue south and go all the way to the borders. Şanlıurfa plans to use this strength to become a transportation center. As a result, investments in roadside hotels and gas stations are on the rise. It also appears the city's exports have been on the rise in recent years. In 2010, exports reached 180 million dollars, of which both Iraq and Syria constitute a significant share. In 2008, 70 percent of total exports in Şanlıurfa and in 2009, 80.5 percent, went to Iraq and Syria. Therefore, after the recent developments in Syria, the city is under close surveillance.
Urfa homes are being renovated
Urfa homes, which are one of the symbolic images of the city, are also now being renovated. Some are near completion and the efforts are being made to ensure the area, especially around Balıklıgöl does not look run down. The unique homes which have thousands of years of history and are well-known for their architecture also increase tourism potential.
A 400 million dollar hotel
With the rise in the city's tourism potential coupled by the lifting of visa regulations with Syria, Şanlıurfa's investment demands are on the rise. There is also significant interest in the hotel region being developed by the governorship in order to promote tourism. Hilton's new hotel investment has recently opened to service. Construction on the Sheraton will soon be complete. New investments in Şanlıurfa are expected to reach a 300-400 million dollar investment volume as well as to provide 10,000 people with employment opportunities. Perhaps the most important sector that is on the rise in Şanlıurfa is the energy sector, however. While a 113.1 billion liras investment in electricity production is foreseen in the city, at present the largest licensed projects and a 69.4 billion dollar investment has already transpired in the east and southeast. The largest investment in electricity production at five billion dollars has been made in the city.