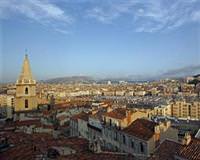 Founded in 600 BC by the ancient Greeks, Marseille is the oldest of France's cities, as well as its second largest metropolis after Paris and its biggest port.

Its more than two-and-a-half millennia of history is pitted with piracy and plague, rebellion and revolution.

So many Marseillais revolutionary volunteers marched off to the capital, singing as they went, that they gave their name to the national anthem La Marseillaise.

For an overview of a city which combines a stunning natural setting between the mountains and the Mediterranean with a sprawling industrial port, oil refineries and heavy industry, arrive in Marseille by plane.

If you arrive at the Saint Charles train station, exit down the grand staircase, immortalized in numerous films, and look across at one of the city's great landmarks -- the church of Notre Dame de la Garde (literally, our lady of the watch), perched on one of the city's many hills.

10 a.m. On arrival, hotel options include those near the station or you may want to head to the Vieux Port (old port). Once the city's main port, now the home of fishing boats and pleasure craft.

If you're laden with bags, there are trams or a metro line to take you on your way. Station taxis are best avoided, the locals advise.

Otherwise, it's a 15-minute walk down the Canebiere, named after the plantations of chanvre -- the French for hemp -- which used to grow there.

10:30 a.m. One way to understand Marseille is to leave it on a boat trip from the Vieux Port.

Short trips include a visit to the Frioul islands scattered off the coast and home to Chateau d'If, built in the 16th century on the orders of King Francois I as a defense against attack from the sea.

It later became a prison to real and imagined prisoners, including characters in the Alexandre Dumas 19th century adventure story "The Count of Monte Cristo."

In addition, the Frioul islands are known for their wildlife, but you also have the option of getting close to nature on a short trip to Les Calanques -- chalk inlets that stretch from Marseille to Cassis, some 20 km (12 miles) east.

Reached from the sea, they seem like extremely remote havens of wildlife, but are in many cases inhabited and are considered part of the city of Marseille.

12:30 The short trips (longer trips, are also available) will get you back in time for lunch in the Vieux Port, where the local specialities include the tongue-twisting bouillabaisse et sa rouille (fish stew with garlic sauce) and aioli -- garlic mayonnaise with cod, seafood and vegetables.

A good option is La Caravelle, whose balcony gives a view through the masts of the Vieux Port to Notre Dame de la Garde.

It is situated on the first floor of the Belle Vue Hotel, one of the many accommodation possibilities.

Another is Hotel Hermes, just round the corner, with terraces -- also with fine views -- and an affordable bridal suite.

2 p.m. Fortified, head up the hill to the basilica you've been observing from afar. It's a roughly 20-minute climb, or if you want to cheat, buses and a tourist train leave from near the Vieux Port.

The hill-top has been the site of a chapel since the 13th century, but the existing neo-Byzantine building dates back only to 1864 and is the work of architect Esperandieu, a name that in French implies hope in God.

Known to the locals as "la Bonne Mere," the good mother, Notre Dame de la Garde is crowned by a giant statue of the Virgin Mary, holding her baby Jesus.

As a list of statistics nailed to a wall at the top of the hill notes, the golden statue is more than nine meters (yards) high and weighs more than nine tonnes, while the circumference of the baby Jesus' wrist measures 1.10 meters.

You might well be more impressed by the view down on to the Vieux Port, the Frioul islands off the coast and the streets snaking down the hillside.

4 p.m. Arrive back at the Vieux Port and head to the heart of the city's old quarter, which is known as the Panier, the name of one of its steep, narrow streets.

If you need refreshment after your hill climb, the district has a wealth of cafes, all serving Marseille's most famous drink, the aniseed-flavored aperitif pastis.

It also has soap shops by the score, where you can buy Savon de Marseille of various shapes and perfumes, as well as herbs and lavender.

For all the sweet smells and tourist chintz, Marseille has not lost its political edge. Street graffiti denounces the deportation of the illegal immigrants.

6 p.m. Round off your tour of Le Panier district by calling in on the city's cathedral. It's on your way back to the Vieux Port and is the work of the same architect as Notre Dame de la Garde.

Time then for another aperitif if you haven't had one already or maybe a pit-stop at your hotel before you venture out for dinner.

8 p.m. Apart from the seafood and provencal specialities, food options in Marseille include the tagine and couscous brought to the city by the city's North African population.

You could combine North African fare with a tour of the Noailles Arab quarter and its spice sellers.

The influence of Italy is also strong.

At Pizzeria Chez Noel on the Canebiere, pizza toppings include supions -- a kind of small squid for which Marseille is known -- and spaghetti is served with pourprions, another local squid-like speciality.

10 a.m. Depending on Saturday's boat trip, you could spend the day at Les Calanques.

Longer excursions allow you to leave the boat and, accompanied by a guide, explore the nature at large among the chalk cliffs.

But Marseille is as much industrial as natural and if you want to appreciate that, you could arm yourself with a picnic, hire a car and head to one of the beaches to the northwest.

Plage Napoleon combines kilometers (miles) of white sand and turquoise sea with a view back to the refineries and storage tanks of the huge oil, container and mineral port of Fos Lavera.

The route from Marseille takes you past what remains of the original village of Fos, perched on a hilltop, as well as through marsh-land populated by flamingos and other waterbirds.

3 p.m. A boat trip could leave time for a quick glance at one of the city's many museums, which cover topics from high fashion to the history of the port.

Some are closed for refurbishment in preparation for Marseille's turn as European City of Culture in 2013.

The tourist office by the Vieux Port will give you an update, but you should be able to get into the Memorial de La Marseillaise, a celebration of La Marseillaise tucked away in Rue Thubaneau behind the train station.

6 p.m. You might contemplate a final pastis followed by an early dinner -- perhaps in the bars of the trendy square Cours Julien in the bohemian La Plaine district.

Finally, head for your plane or take the train back away from the Mediterranean and through the mountainous hinterland.