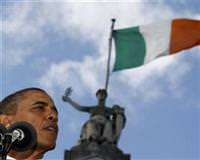 After Barack Obama put it on the map by downing a gulp of Guinness, residents of the U.S. president's tiny ancestral home of Moneygall have spent the past week greeting busloads of tourists.

"There was a busload of Japanese tourists this morning and there were Americans here earlier too, looking for Henry to have his photograph taken with them."

Restaurateurs, hoteliers and tour operators countrywide are now hoping for a "Moneygall effect" of their own.

Obama's morale-boosting stop-off, together with Queen Elizabeth's historic state visit just days earlier, have given Irish tourism a boost it desperately needed after three years of recession saw revenues and visitors drop by about a third.

After a record 1,200 foreign journalists arrived for the first visit of a British monarch since independence from London in 1921, global headlines took a rare positive turn -- a break from the relentless run of bad economic news that culminated in Ireland's IMF/EU bailout late last year.

The renewed interest in a country famed for its beautiful coastlines and rich literary history seems to be working.

Internet searches by potential visitors from Ireland's two main overseas markets surged by almost 200 percent for some tourist spots included on the royal itinerary, according to Hotels.com, a leading provider of worldwide hotel accommodation.

The website said searches last week by UK tourists for the county of Tipperary, where the Queen visited the Rock of Cashel, a medieval national movement that attracts thousands of tourists each year, nearly trebled compared to a year ago.

Searches by U.S. tourists for Cork -- the last stop of the Queen's four-day trip -- doubled. Interest also jumped at home, with 225 percent more Irish tourists thinking of visiting Kildare, where the Queen spent an afternoon in the heartland of Irish horse-racing.

With state-funded Tourism Ireland increasing its advertising spend this month by 35 percent compared to a year ago, officials say they are prepared to capitalize on the publicity.

"If we were riding along normally, I'd say it's lovely to have the queen here and you're always delighted to have the President of the United States, but it would have a marginal impact on tourism," Eamon McKeon, chief executive of the Irish Tourist Industry Confederation (ITIC), told Reuters.

"But I think coming as it did at the tail end of six months when the news has just been awful every day, it's far more important. It's up to us to stretch the publicity out for months and milk the goodwill for all it's worth."

Ireland's new government is banking on a recovery in the tourism industry, having this month come up with a modest package of measures to revive the labor-intensive sector.

Dublin agreed the measures -- which include a temporary reduction in the sales tax on restaurants and hotels, an easing of visa restrictions and the scrapping of a travel tax -- with its creditors in the IMF and the European Union, on the basis that it would not derail efforts to cut the budget deficit.

ITIC predicts that these measures, along with the increased publicity and a regaining of some of the competitiveness lost during the heady days of the "Celtic Tiger" economy, when hotel prices jumped, will return the industry to revenue and visitor growth of between 4 and 6 percent this year.

McKeon said 10 percent growth in 2012 and a 6 percent rise per annum after that would -- all things being equal -- see the industry match its 2007 peak where it welcomed 7.7 million tourists to the country.

While economic recovery will be led by exports and a hoped-for recovery in consumer spending, economists say a pickup in tourism would do much to eat into Ireland's 14.6 percent unemployment rate, the second highest in the euro zone after Spain.

"It won't bring a huge amount of money into the economy on a national sense and it won't for example do a great deal to solve the budget deficit, but it gets at those industries that are hurting the most," said Ronnie O'Toole, chief economist at National Irish Bank.

"We have got a few very big problems right now and one of them is unemployment, so strong growth from the one export sector that's really employment-intensive would be very positive."