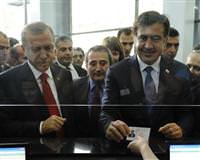 Turkey has put an end to mutual passport regulations for travel between Turkey and Georgia. According to the new regulations, citizens from both countries will be able to travel with their official identification cards instead of a passport.

Turkey has signed on to a historical agreement to banish the requirement of passports for travel with Georgia. Prime Minister Tayyip Erdoğan participated in the opening of the facilities on the Georgian side of the Sarp border with Georgian President Mikheil Saakashvili yesterday. During the opening ceremony, protocol was signed to establish the new regulations which allows for citizens of both countries to be able to travel with official identification instead of passports.
While in Georgia, Prime Minister Erdoğan also delivered news of a 'joint border model' which will be implemented with Georgia and aims to decrease the formalities at border gates. The Sarp Border Gate will be the pilot destination; and later the process will also be implemented for border gates shared with Syria and Iran.

A THIRD BORDER GATE
"On March 5th, 2009 we also participated in the opening of the modernized facilities with Saakashvili," Erdoğan states. "These openings are very important for us. Turkey takes the top spot for Georgia's imports and exports. Trade volume in 2010 surpassed one billion dollars and continues to increase. At present there are two border gates operating between Georgia and Turkey, the Sarp and Türkgözü. In 2011 we will be bringing that figure up to three by laying the foundation for the Çıldır-Aktaş border. "