An airport for Kocaeli 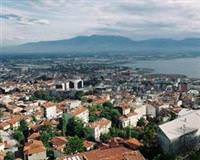 With the Cengiz Topel Airport opened for civilian aviation, 35,000 passengers are anticipated to pass through each week.

East Marmara Development Agency General Secretary Erkan Ayan has announced that the Cengiz Topel Airport, which has newly opened to civil aviation, will be transporting 35,000 passengers weekly.
According to an announcement by Ayan, the Cengiz Topel Military Airport will now be serving the Kocaeli, Sakarya, Düzce, Bolu and Yalova districts, which are strategically located in the Eastern Marmara region which has now reached a population of 3.7 million. Explaining that the construction of the Cengiz Topel Airport is now complete, Ayan states the following:
''We are now working on charting feasibility on the airport's advantages to the region. With its strategic location, and sea, highway, railway and now airport connections, the region is set to become an excellent connection point.
The Cengiz Topel Airport will not solely operate for Kocaeli, but will also actively serve the nearby districts of Sakarya, Düzce and Bolu, thereby serving a population of 20 million. With the opening of the Cengiz Topel Airport to civilian aviation, taking into consideration demand due to tourism, vacation, family ties, international business relations and flights for the Hadj, anticipation is that with a 65 percent capacity filled, 35,000 passengers will pass through weekly."