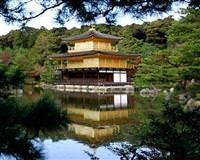 Kyoto, Japan's ancient capital, is a laid-back counterpart to Tokyo that was first established more than a thousand years ago. Far to the west, it is a good place to forget the current capital's woes.

Kyoto's wide avenues follow a grid pattern that invites easy walking, one of the best ways to explore. Strolls reveal a modern city, but one where traditional touches -- a tiny shrine, upswept temple roofs -- are never far away.

Reuters correspondents with local knowledge help visitors make the most of a city that was Japan's capital until 1868.

6 p.m. - Walk through one of the hanamachi, or geisha districts, and you may see a geisha or apprentice geisha heading out for the evening. Sightings of these women in elaborate kimono, thick white makeup and gleaming hair are especially likely in the Miyagawa-cho district, where taxis line up to whisk the geisha away to engagements at exclusive traditional restaurants.

7 p.m. - Dinner at Tako Nyudo, which specializes in "obanzai," or Kyoto homestyle cooking. Offerings on a recent day included yakitori, lotus root simmered with ground beef, and simmered pumpkin, but there are more exotic dishes such as tiny whole octopus stewed in soy. Ask the chef to whip up the house specialty: Akashi yaki, which resemble small round omelets wrapped around a chunk of octopus. Many of the plates and bowls were made by the woman who runs the restaurant.

9 p.m. - Stroll along the banks of the Kamo River. In spring, the eastern banks are lined with flowering cherries and newly green weeping willows, while in the summer diners can sit on terraces overlooking the water and gaze out toward the mountains that surround the city. At any time of year buskers may be performing along the banks.

Typical Kyoto scenery is the couples seated along the bank from afternoon into the evening, somehow always managing to space themselves exactly the same distance apart.

9 a.m. - Head out for some temple viewing, armed with a free bus map from tourist information in front of Kyoto Station. The featured flowers in the temple gardens change with the seasons: cherries in the spring, followed by rhododendrons, azaleas and hydrangeas. Fall brings red maple leaves.

A good place to start is Sanjusangendo, a vast wooden hall filled with 1,001 statues of Kannon, the goddess of mercy. The face on each of the faded gilt statues is said to be different.

Another essential is Ginkaku-ji, the Silver Pavilion, famed more for its gardens than the actual pavilion, which is made of weathered brown wood. Notable are representations of Mount Fuji and the ocean, both made of sand.

From Ginkaku-ji, walk the "Philosopher's Trail," a stone path lined with cherry trees that winds south past temples and souvenir stores. The walk leads you to Nanzenji, a sprawling complex of temples whose park-like grounds are a good site for a rest and people-watching.

12 p.m. - Lunch at one of the many restaurants surrounding Nanzenji, which offer set meals centered around tofu, often in rooms looking out across traditionally landscaped gardens.

2 p.m. - If temple burnout hasn't struck yet, try Kinkaku-ji, the Golden Pavilion. Though the temple building itself was rebuilt after being burned down in the 1950s -- an incident that became the base for the Yukio Mishima novel "The Golden Pavilion" -- and looks it, the grounds are pleasant.

Nearby is Ryoanji, home of a famous rock garden, and Ninna-ji, where long corridors with smooth wooden floors are cool under tired feet.

7 p.m. - Dinner at "Kushi Kura," a restaurant in a century-old building specializing in grilled or fried skewers of chicken, vegetables and other tidbits, and a full array of sake. The roughly 5,000 yen ($62) course menu is filling and includes grilled chicken, tempura vegetables in season, and dessert. (ichigao-kushikura.com/)

9 a.m. - Trek through Nijo Castle, the former home of the feudal lords who were the real rulers of Japan. Completed in the 1620s, it features richly decorated rooms and corridors with "nightingale floors," built to squeak as a way of protecting residents from sneak attacks and assassins.

11 a.m. - For an antidote to all the history, head for the Kyoto International Manga Museum, which has thousands of different items of manga -- Japanese-style comics -- available for visitors to peruse, along with historical comics and comics from around the world. (www.kyotomm.jp/english/)

1 p.m. - Grab lunch at an "okonomiyaki" restaurant anywhere in the city. These feature thick cabbage pancakes studded with octopus, pork, beef or seafood as you choose, cooked on a tabletop griddle. Slather it with dark sauce and a few squirts of mayonnaise -- it's surprisingly good.

3 p.m. - Walk up to Kiyomizu-dera, a temple famous for its large wooden stage jutting out over a valley. From here you can see across the city. Other sights include a shrine said to bring romance.

5 p.m. - Head down from Kiyomizu. Hawkers of salty pickled plum tea offer refreshing samples, as do vendors of sweets.