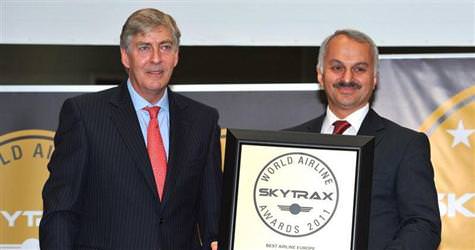 Skytrax, the world’s largest airline review site, has selected Turkish Airlines as the number one airline in three different categories.

Skytrax has awarded the top airlines for their service in the civilian aviation sector. The results were announced during the 'Paris Aviation Fair' which is currently ongoing at the Bourget Airport.
During a ceremony held at Bourget's aviation museum, Turkish Airlines was the recipient of the 'Best Airline in Europe' award. Results determined by the votes of over 18.8 million passengers in 100 countries, also selected THY as the 'Best South European Airline' and the 'Best Airline for Premium Economy.'
THY General Manager Temel Kotil accepted the awards by Skytrax chairman Edward M. Plaisted.
Qatar Airline was selected as the airline of the year, according to an annual evaluation from May 2010, until present. Skytrax is renowned for determining airports and airline service according to passengers' votes.